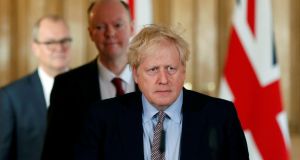 Boris Johnson: When he leaves hospital, his doctors will almost certainly advise him to rest at home for a while before returning to work. Photograph: Frank Augstein/Pool via Reuters

The good news from Downing Street on Tuesday evening was that Boris Johnson’s condition was stable and although he remained in intensive care “for close monitoring”, he was in good spirits. The prime minister has been receiving oxygen treatment but he has not needed a ventilator or any other kind of respiratory support.

If his condition improves, Johnson can expect to leave intensive care within days but he is likely to remain in hospital for longer. And when he leaves hospital, his doctors will almost certainly advise him to rest at home for a while before returning to work.

Foreign secretary Dominic Raab is deputising for the prime minister, chairing meetings and appearing at daily press conferences in Downing Street. But Johnson remains formally in charge of the government and Downing Street has avoided giving the impression that Raab is acting prime minister.

He is still operating out of the Foreign Office rather than No 10 and Queen Elizabeth’s weekly meetings with the prime minister (conducted over the phone in recent weeks) will not resume until Johnson is back at work. And although the armed forces will report to Raab, he does not have the authority to sack ministers or to appoint new ones.

At Tuesday’s press briefing, Raab played down the risk of a vacuum at the top at a time when coronavirus leaves the government facing life and death decisions, suggesting that Johnson had already set out the plan and ministers just had to implement it. But when he was asked if the government stood by Matt Hancock’s promise to ramp up testing dramatically by the end of the month, he dodged responsibility, referring to it as “the health secretary’s 100,000 per day target”.

The first big decision, on whether to extend the social distancing measures introduced last month, will come next week, but there is no question of ministers lifting the lockdown during the peak of the epidemic.

Like its counterparts elsewhere, however, the British government must decide in the coming weeks when and how to end the lockdown and start to return to normal life. There are already tensions between ministers who fear that lifting restrictions too soon will see an immediate surge in deaths from coronavirus and others who warn that each week in lockdown brings more businesses closer to terminal collapse.

This is a decision so consequential and involving such momentous trade-offs that it is difficult to see how ministers can make it until Johnson returns to Downing Street – or hands real power to someone else.