Can I get coronavirus from taking the lift? Here’s what experts say

When infected people use elevators, they probably do leave some germs behind 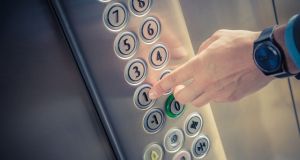 Taking the elevator: wear a mask and wash your hands to lower your risk of contracting Covid-19. Photograph: Zoff/iStock/Getty

For people who live or work in tall buildings, taking a lift or an elevator feels riskier in the time of coronavirus. Even if we can avoid taking it with other people, are we still surrounded by the germs they left behind? “Elevators are tricky,” said Linsey Marr, an aerosol scientist at Virginia Tech. “It really depends on the elevator.” Most elevators aren’t big enough to allow people to stay 2m (6ft) apart, so there’s a chance that infected passengers could transmit the virus, particularly if they are unmasked and are coughing, talking or just came in from a jog and are breathing heavily.

But even if you’re taking a lift alone, there are other ways you might catch the coronavirus, although the risk is low. The buttons and side rails are a potential risk if your hands become contaminated and you touch your face. And what about the air in the lift? If you step into a lift after an infected person has been in it, can you breathe in floating germs?

Richard L Corsi, dean of engineering and computer science at Portland State University and a specialist in indoor air quality, set out to learn more about elevator safety by creating a model using principles of engineering and fluid mechanics. But he discovered that given the variety of elevators and buildings, there are thousands of scenarios that give different results.

I don’t know whether the dose in an elevator is going to be high enough to pose significant risk, but I would probably take the stairs if possible

What size is the elevator? How fast does the elevator travel between floors? How long do the doors stay open, allowing new air to mix in before the doors close again? Does the elevator have a ventilation system? Corsi decided to model a hypothetical elevator ride using common elevator speeds, door closing times and ventilation systems. In this model, infected Passenger A walks into an elevator on the first floor, alone, for 31 seconds to the 10th floor of a residential building. During the ride, the passenger, who is not wearing a mask, coughs and talks on a phone, exhaling tiny droplets that contain the virus. Some droplets fall to the ground, some hit the sides of the elevator, and some float in the air.

Based on this model, Passenger B is exposed to about 25 per cent of the viral particles Passenger A expelled during his ride. Corsi cautioned that the number would change in a different elevator, depending on how long the doors stay open, the elevator ventilation system and the different air pressures in the building.

The bigger question is whether Passenger B would get sick after being exposed to lingering viral particles during a short time in the elevator. In a single cough, a person can cough a few thousand or even 300,000 particles, and doctors still don’t know what dose of coronavirus – one infectious viral particle, or thousands – is needed to make a person sick.

“The main intent of the exercise was just to show that some level of virus can be sustained in air beyond an infected person using the elevator,” Corsi said. “I don’t know whether the dose in an elevator is going to be high enough to pose significant risk, but I would probably take the stairs if possible.”

Still, many infectious disease experts don’t believe that airborne particles in empty elevators pose a significant real-life risk when it comes to coronavirus. Dr Ilan Schwartz, assistant professor of infectious diseases at the University of Alberta, noted that even when a person with Covid-19 is living in close quarters with other members of the household, the infection rate has been estimated at about 10-20 per cent. That’s much less contagious than an airborne disease like measles, which would have an infection rate of 75-90 per cent, he said.

While it’s possible that coronavirus droplets can remain in the elevator air for a period of time, in the real world, the main mode of transmission is through close exposure to an infected person who coughs or exhales droplets in your presence.

“We know there’re some small particles that are likely to stay in the air, but at the end of the day the epidemiology just doesn’t support this being an important mode of transmission,” said Schwartz. “Probably the risk from being in an elevator would be more related to touching the buttons than it would be to being in contact with air that was exhaled from someone who was riding it before.”

The solution for those of us who must use elevators is to take common sense precautions. First, when possible, avoid using it with another person. And always wear a mask inside the elevator, even if you’re alone – a mask will help protect you from the last passenger, and will protect the next passenger from your germs. Avoid touching your face after touching elevator buttons, and wash your hands afterward. And if you must use it with another person or two, don’t get in unless everyone inside is wearing a mask.

Marr notes that the presence of viral particles doesn’t necessarily mean a person will get sick, but you should still take steps to avoid the risk. “Viral RNA tells us that the virus is there, but it doesn’t tell us whether the virus is infectious,” she said. “If we detect 100 copies of viral RNA, we think there might be about one infectious virus. We don’t know how many it takes to make you sick, probably more than one. The risk is low, but I would wear a mask on the elevator.”– New York Times