Coronavirus: how do I get tested to see if I have Covid-19?

Everything you need to know about getting checked for the condition 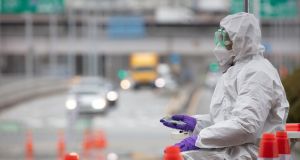 A medical worker at a drive-through clinic to check for coronavirus infections in Seoul, South Korea. Photograph: EPA

How many people have been tested?

According to the Health Service Executive (HSE), it tests people who have either been in close contact with a confirmed case of coronavirus, also known as Covid-19, or have been to a place where there is spread of coronavirus in the last 14 days, and who are also exhibiting symptoms such as a cough, shortness of breath, breathing difficulties or a fever.

People with a severe lung infection may also be tested, as may those who have developed pneumonia.

People who are feeling unwell are advised to consult the HSE website, or ring the HSE Live helpline on 1850 24 1850 for advice, or if necessary to ring their GP. They are advised not to visit to their GP or emergency department.

Where does testing take place?

In the early days of the crisis, testing took place in emergency departments or other hospital settings. However, increasingly there is an emphasis on testing people in their own homes, with the National Ambulance Service taking responsibility for this testing. There are other ways of getting tested, such as the pop-up facility established in a former Garda station in Lahinch, Co Clare.

How long can I expect to wait for a result?

There is no hard and fast rule, but the Department of Health has said it aims to turn tests around in a window of 24 to 48 hours, although some people have reported waiting on results for longer than this.

Who is responsible for testing and how does it work?

The test is generally taken by swabbing someone’s nose or throat, but a respiratory sample can be taken from sputum if people are coughing. Testing and a molecular diagnosis then follows.

Testing was initially carried out in the UK, but the National Virus Reference Laboratory (NVRD) in University College Dublin developed a test for the virus and it is now responsible for Irish tests. A test that is submitted before 10am can be turned around before teatime, but any later than that and a result will not be available before the next day.

What is the current capacity for testing, and will that change?

Again, there isn’t any hard and fast data, but the figures suggest a current capacity of around 200 tests a day. The intention is to roll out new testing centres around the country, which will take some of the pressure off the NVRD, and increase the capacity of the system to “thousands” per week.

Will the testing regime change over time?

The anticipation is that Ireland will move out of the containment phase and into the delay phase of the outbreak in time, but exactly when that occurs depends on the rate at which cases are confirmed. When that happens, testing policy will be reviewed, and there may be less of an emphasis on community testing as resources are shifted to looking after the sickest people, although this will be determined at the time.

Are there privately available tests?

At least three companies in Ireland have developed, or are in the process of developing, diagnostic tests for Covid-19.

Co Antrim company Randox is the most advanced in this regard, having shipped tests kits last week to hospitals in China.

Randox’s system, which requires laboratories to already have its proprietary technology, can process up to 324 patient samples over an eight-hour period.

Dublin-based Hibergene is developing a test which it says would deliver results within 60 minutes. The product will only be available for sale in the coming months.

Elsewhere, Reagent Genie has developed a testing kit for researchers including academics and companies involved in developing a vaccine.