Taoiseach Leo Varadkar and other EU leaders have agreed for funding to "help develop new tests, new treatments and a vaccine " for coronavirus "as rapidly as possible." 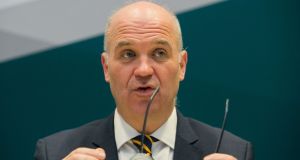 Dr Tony Holohan, chief medical officer at the Department of Health, during a media update on the confirmed case of coronavirus at Miesian Plaza, Baggot Street, Dublin. Photograph: Gareth Chaney/Collins

Ten new cases of coronavirus have been reported this evening, the biggest daily increase recorded since the disease was found here at the end of February.

The new cases bring the total number in the Republic to 34; another four cases were reported in Northern Ireland on Tuesday, bringing its total to 16.

The new cases involve six males and four females. Five of the cases were in the south of the country, three in the east and two in the west.

There has also been a massive increase in the number of people being tested, up to 1,784 from 297 a week ago.

Asked whether schools would be closed to curb the spread of the virus, the State’s chief medical officer Dr Tony Holohan said such a measure could be deployed “at some point in time” depending on what happened, “but that time is not necessarily now”.

Blanket restrictions in place on visiting at nursing homes and some hospitals, aimed at curbing the risk of infection, should be lifted, Dr Holohan said.

Dr Holohan said visitor restrictions – which were introduced in private nursing homes across the State earlier this week – had a major impact on residents, for whom social interaction was a key part of wellbeing.

While restrictions might be necessary in a particular nursing home depending on circumstances, Dr Holohan said there was no case for across-the-board restrictions. “We want to avoid introducing measures before they are really necessary,” he said.

The National Public Health Emergency Team (NEPHT), at a meeting on Tuesday, declared that “socially restrictive actions” around hospitals and nursing homes were “not necessary at this moment in time”, according to a statement issued later.

Public health officials also described the measures recommended by undertakers, including the immediate cremation of deceased people in body-bags, as “unnecessary”.

Detailed guidelines on the handling of deceased people who have coronavirus also known as Covid-19 are to be published on Wednesday. It will be evident from these that the measures proposed by the Irish Association of Funeral Directors are not necessary, Dr John Cuddihy, director of the Health Protection Surveillance Centre said.

The officials said people should be encouraged to follow respiratory etiquette and hand hygiene procedures in order to protect vulnerable groups, including older people and patients with underlying conditions. People should not visit if they themselves are unwell.

The annual St Patrick’s reception in Washington DC, hosted by the Irish Ambassador to the United States, has been cancelled. However, a meeting between US president Donald Trump and Taoiseach Leo Varadkar will go ahead.

On Tuesday afternoon, Ryanair and Aer Lingus said they were suspending all flights to and from and within Italy following the decision of the Italian government to lock down the entire country to contain the spread of coronavirus.

Ryanair said the suspension of internal flights would come into force at midnight.

Flights into and out of Italy will be suspended at midnight on Friday, March 13th. The measures will be in place until April 8th.

Aer Lingus has cancelled all flights to and from Italy from Wednesday, March 11th, until April 3rd.

Minister for Foreign Affairs Simon Coveney said residents of Ireland should not travel to Italy unless it is absolutely necessary.

Minister for Business Heather Humphreys has meanwhile cancelled her St Patrick’s Day trip to the US west coast.

Ms Humphreys told Northern Sound radio she needed to remain in Ireland to deal with the effects of the viral outbreak on businesses.

She said she made the decision last Friday. “I’m meeting with the Enterprise Forum this afternoon and the banks later on in the week. In fact, last Friday I made the decision to cancel my St Patrick’s Day trip to San Francisco [and Sacramento] so I could be here to focus on our response to what is an evolving situation.”

The movements of Italy’s population of 60 million is being severely limited after the lockdown area was extended to the whole of Italy last night, not just the most severely affected areas of the north.

On Monday night, Italy’s death toll from the virus jumped by 97 to 463.

Italy has moved to temporarily suspend the payments of bills, taxes and mortgages to ease pressure on small firms and households.

Mr Coveney said while the Government can advise Irish citizens not to travel to Italy, “we cannot control a country in lockdown”, and could not stop Italian citizens from travelling to Ireland.

There are no experts on the virus as it was unknown prior to nine weeks ago, he said. “We are trying to understand more each day,” the Minister told RTÉ Radio.

The EU’s disease prevention agency is set to tighten its advice as evidence emerged that people showing no symptoms could spread the virus.

EU leaders will hold an emergency conference call on Tuesday afternoon to discuss a response to the deadly virus.

Also on Tuesday, Minister for Finance Paschal Donohoe said the Government was open to implementing difficult decisions, including closing down schools and universities.

Apple has sent a number of employees to self-isolate following a confirmed case in its Cork office. Lectures at Trinity College Dublin will be suspended from tomorrow.

All St Patrick’s Day parades across the State were cancelled on Monday in a bid to curtail the spread of the virus.

Mr Coveney said while Ireland remains in the containment phase, it was inevitable the country would move into the delay phase as more cases emerged.

Because there is no vaccine and no treatment, the only way of limiting the spread is through good public community care and health care, he said.

The Government was not ruling out any course of action, he said. If the virus starts to spread in different clusters around the country, then the Government will delay the spread “as best we can. The challenge is to slow down infection, to give health authorities time to cope.”

Mr Coveney pointed out that even if only a small percentage of those infected suffer a significant health impact, the fatal percentage could mean thousands of deaths.

“This is a challenge that is unprecedented. A lot is happening, advice will be upgraded on a daily basis.”

Any decisions on public gatherings need to be made on the basis of sound evidence, he said. His own schedule for a trip to New York for St Patrick’s Day is being reviewed on a daily basis, he said.

Any measures with regard to the coronavirus are only going to work if the public co-operates. “Together we can save lives.”

Ireland’s Iseq stock market index rallied early on Tuesday, as global equity markets recovered some of the huge losses sustained in the previous session in the biggest sell-off since the 2008 financial crash.

1 Quarantine process to be tightened as health officials grow nervous
2 US passengers fly into Dublin: ‘I’m here for six days. I guess I’ll have to stay inside’
3 Back with our old friends at eir – and nothing seems to have changed
4 White House turns its fire on Anthony Fauci over Covid-19 comments
5 ‘I thought it was a hoax’: Patient dies after Texas Covid party
Real news has value SUBSCRIBE