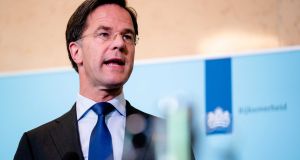 Dutch prime minister Mark Rutte: ‘Countries that are bailed out will have to say what they will do to make sure this situation does not arise again.’ Photograph: EPA

Dutch prime minister Mark Rutte has warned that countries that are bailed out under the EU Commission’s proposed €750 billion Covid-19 recovery programme will have to explain the fiscal reforms they plan to make to prevent becoming financially exposed again in a future crisis.

Coming just hours after details of the fund were revealed by Brussels, Mr Rutte’s comments will dismay “southern” countries such as Italy and Spain, who point out that the economic shock they face is the result of the global pandemic rather than a failure of domestic economic management.

According to the commission, the fund will be made up of €500 billion in grants and €250 billion in loans and will be generated by lifting the EU’s resources ceiling to 2 per cent of the bloc’s gross national income, a move that will rely heavily on its strong credit rating.

It will come in addition to an increased budget of €1.1 trillion for the seven years from 2021 to 2027, up from the €1.095 trillion anticipated earlier this year. Taken together with an initial rescue package of €540 billion agreed in April, it brings total Covid-related aid to an eyewatering €2.4 trillion.

Commission president Ursula von der Leyen hopes the scale of that response will end months of squabbling between wealthy and less well-off countries over whether aid should come with strict conditions attached or in the form of mutualised debt to be shared by the 27.

While the Netherlands has been at the head of the fiscally conservative “Frugal Four”, arguing – along with Austria, Sweden and Denmark – in favour of loans and against grants, the so-called Club Med countries favour the latter, fuelling a bitter row that has threatened to splinter the union.

That’s why Mr Rutte was adamant even before Ms Von der Leyen’s announcement that a recovery fund “should consist of loans without any mutualisation of debt” and why he remained adamant on Thursday that the commission’s proposals were simply that – proposals to be negotiated.

He said the Netherlands was already in “intense and constructive contact” with other member states and with the commission, and he expected those negotiations to “take some time”.

However, there was no indication that he planned to soften his stance when he commented: “We have set out our position clearly: countries that are bailed out will have to say what they will do to make sure this situation does not arise again.”

He did not say what form such a commitment might take.

In reverting to the tough stance that led to acrimonious exchanges with Italy, Spain and Portugal last month, Mr Rutte is flying in the face of advice from the Netherlands’ Social and Economic Council, which includes employers and unions, and which has called on him to be more collaborative and less confrontational in the Covid-19 negotiations.

“Our advice to the government is to show solidarity and co-operate with other EU states,” the council said.

“It is in the Netherlands’ own interests to make sure that the southern European countries do not drown in their own debt but find their way out of this crisis as soon as possible.”