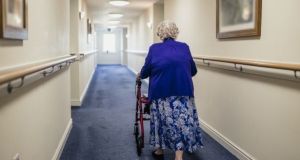 It is “quite unpredictable” why the virus was “particularly virulent in one particular facility versus another.” Photograph: iStock

It is “quite unpredictable” why Covid-19 is “particularly virulent in one particular facility versus another,” a senior HSE adviser for older persons has said.

Dr Kennelly, who is the HSE national clinical adviser and group lead for older persons, said public health officials were going to analyse individual outbreaks in HSE-run facilities and share the results of its analysis with the families of the victims first.

The HSE says it is still trying to understand why some Covid-19 outbreaks have led to greater numbers of deaths as a proportion of residents in certain care homes than in others. It is examining trends in clusters of infection affecting outbreaks in HSE-run facilities.

Previously unpublished HSE figures on more than 1,000 confirmed and suspected Covid-19 deaths in 167 settings - obtained by The Irish Times - show that some nursing homes lost larger proportions of residents to the coronavirus disease during outbreaks over the past two months.

Higher numbers of deaths in a particular home, health sources said, may be influenced by a variety of factors. These include the pre-existing demographic mix of the home, as well as the profile of long term illnesses in the home, or whether a home is willing to accept very ill people as residents.

Nursing homes and residential care facilities have borne the brunt of the pandemic, accounting for almost 63 per cent of all 1,631 Covid-19 deaths in the State.

The HSE-run Rock Nursing Unit in Ballyshannon, Co Donegal experienced 10 Covid-19 deaths at a facility that has a maximum occupancy of 22, the equivalent of 45 per cent of its capacity.

Padre Pio Nursing Home in Clondalkin, a privately owned facility, had 13 deaths or almost 42 per cent of the nursing home’s maximum occupancy of 31.

Beechwood said while it had 16 deaths in that period, 10 were Covid-19 confirmed or suspected but another six did not have Covid-19 listed as a contributory factor in the deaths.

Dr Kennelly said that many nursing homes were still battling outbreaks and that it took two 14-day incubation periods of the virus before an outbreak can be declared officially over.

The State’s chief medical officer Dr Tony Holohan said that in broad terms the mortality rate in nursing homes was “not a surprise” compared with what other countries have experienced.

He said that when an older person is infected, Covid-19 has an “almost predictable significant mortality effect irrespective of whether they are living in the community or in residential care facilities, and that is the inherent nature of this virus and the impact it has, unfortunately.”

As of Wednesday, there were 461 clusters in residential care facilities, including in 256 nursing homes - an increase of three on a day earlier.

There was an increase of 100 new Covid-19 cases in residential care facilities bringing the total number of confirmed cases to 6,492. There were 14 more care home deaths reported on Wednesday.

A Department of Health report published this week found the incidence rate of Covid-19 among people aged 70 and over in long-term residential care facilities to be about 45 times greater than in the general population.

The fatality rate among the over 70s who contracted the virus in the general population was 17 per cent but 21 per cent for the over 70s living in care homes.