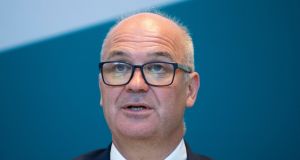 The State’s chief medical officer, Tony Holohan, has told the Government there will be no immediate change to the current two-metre rule for physical distancing.

Dr Holohan held a meeting with the Cabinet on Wednesday where the issue was raised by a number of Ministers.

One source said Dr Holohan indicated there would be no imminent change to the requirement as it was a risk assessment that was necessary in order to suppress the spread of Covid-19.

Ministers were told that reducing the two metres to one metre could increase the risk of infection.

Many businesses have said they would be unable to reopen unless the social distancing guide of two metres is reduced to one metre.

Speaking in the Dáil, Taoiseach Leo Varadkar suggested that the Covid-19 committee could examine the two-metre issue and come up with a recommendation.

“I am not sure if it is possible to get a political consensus on the one-metre or two-metre guidance or the two-hour close contact rule.

“If there is a place to do that, it probably is the Covid committee which has been established.

“The committee seems to be working well and is very representative of the Dáil. I do not think it is something for the party leaders, to be honest.

“The right place to do that is the Covid committee. It can hear the evidence and then make a recommendation to the Government on the one-metre or two-metre rule and the two-hour contact tracing rule. It might be the best form for political consensus to be found, if it can be found.

“I am not sure, however, if it can. In the meantime, we will follow the advice of the public health emergency team.

“It has to be seen in its overall context, however, namely, how prevalent the virus is in the community.”

Mr Varadkar added that “we need to bear in mind that, while there is no such thing as zero risk from this virus, as the risk reduces, then rules can be relaxed. That is what the plan is all about in many ways.”

Minister for Health Simon Harris also insisted “we will be guided by public health advice”. He said there was 99 per cent protection from infection at two metres.

He acknowledged that “it would be hard to get your hair cut from two metres but the general advice is to follow the two metres as much as possible”.

Fianna Fáil leader Micheál Martin warned that the restrictions would lose public support if they were no longer seen as actually being based on clear scientific evidence and the two-metre social distancing regulation was not required by the science.

“If it is true that our capacity to rapidly test, trace and isolate is now in place, then we need to see this reflected in the loosening of policies put in place in part because we lacked this capacity.”

Mr Martin also criticised the 5km limit on how far people were allotted to travel for exercise and said there was no remaining “serious justification” for this.

“The public health concern is how people behave around others – not how far they are from their home.” He added that research showed it could be forcing people in urban areas into more crowded situations.