UK prime minister Boris Johnson has been grilled by members of the House of Commons' Liaison Committee after his adviser Dominic Cummings was found to have broken Covid-19 lockdown measures. Video: Reuters 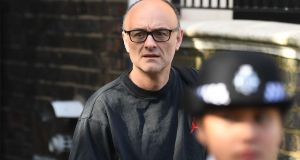 Little has escaped the Dominic Cummings drive-to-Durham episode unscathed: Boris Johnson and his cabinet are discredited, the reserves of goodwill the public hold for the government are running critically low, the lockdown consensus appears to be falling apart. And now BBC Newsnight presenter Emily Maitlis is the latest to find herself in the maelstrom.

In a monologue on Tuesday night Maitlis told viewers: “Dominic Cummings broke the rules – the country can see that and it’s shocked the government cannot.”

She was right. The following day Durham police confirmed that they considered Cummings’s activities to be in breach of lockdown guidelines. And reams of polling show Maitlis captured the public mood.

Mercifully, this was just a brief episode in the otherwise interminable Dominic Cummings psychodrama. The BBC released a statement about impartiality, Maitlis appears to have received a slap on the wrist and the world continues to revolve on its axis.

But as the whole Cummings saga wends its way into a full week of headline-dominating news – bolstered by interventions by Emily Maitlis and Durham police – plenty of people are dumbfounded as they witness the government eviscerate its reputation in slow motion in a bid to protect the job of one political adviser.

That the story could survive this long, despite attempts to deprive it of oxygen since Monday, was perhaps not anticipated by No 10 when they decided to batten down the hatches and back Cummings to the hilt. It was an entirely avoidable scenario had a softer touch been applied: an acknowledgement of wrongdoing, an apology, contrition, in that order.

Instead we were greeted with supine gestures of support from cabinet members across social media, an absentee prime minister seemingly clinging on to Cummings behind closed doors and a government fast burning through whatever small political capital it had left. As a communications strategy, it was certainly unique.

Though there may well already be a moral vacuum in No 10, with Cummings gone there would be an ideological one too

But amid the outrage from the public and questions over the propriety of Maitlis’s intervention, we would do well to remind ourselves that little of this should come as a shock. Thanks to the unique design of Johnson’s government – which saw power centralised into the hands of very few in No 10 – Johnson has little choice but to lay himself on the line for Cummings. That Cummings is not so much an adviser to, but rather the brains, spirit, and character of, this government makes him unsurprisingly indispensable to an administration already failing to keep its head above water.

Though there may well already be a moral vacuum in No 10 right now, with Dominic Cummings gone there would be an ideological one too.

Because when we ask ourselves what Johnson actually believes, it yields few answers. He is not the great liberaliser he once cast himself as – recent efforts to pull up the drawbridge on immigration is evidence enough of that. He is no great defender of institutions, as a traditional conservative might be – he took a sledgehammer to any pretence of that when he prorogued parliament. Nor even is his Brexit a coherent ideology, instead an amalgamation of slogans and meaningless gestures about “levelling up Britain”.

In lieu of Johnson being able to provide the nation with any meaningful direction, Cummings has stepped in as the intellectual, ideological, and operational rudder in No 10. He is someone on whom – writes commentator Iain Martin – Johnson is “psychologically dependent”. And critically, he is someone Johnson cannot afford to lose as the latter grapples with the scale of the crisis engulfing Britain.

In establishing Cummings as an aide with almost unprecedented power, Johnson has fashioned himself a Gordian knot

But now that Cummings finds himself at the heart of a deep and far-reaching scandal, the structural flaws on which Johnson assembled his government have become clear. If you transfer the locus of power in Westminster to the office of one man in No 10 Downing Street, you cannot easily rid yourself of them when they are no longer convenient. When you take Cummings away, and with him the so-called psychological crutch of a prime minister who is increasingly revealing himself to be out of his depth, what is left?

In establishing Cummings as an aide with an overweening and almost unprecedented power, Boris Johnson has fashioned himself a Gordian knot. And by the time it came to choose between defending Cummings or chucking him out, it was already too late.

Johnson had to make a calculation. Keep Cummings and risk taking a match to whatever shred of credibility he has remaining. Or get rid of Cummings and with it risk his government ceasing to be a government altogether. It seemed no more than a coin toss between bad and worse. But this flaw at the heart of Johnson’s administration has always been there – all it took was a scandal reveal it.