Ageing Ireland: A retirement village ‘better than a hotel’ 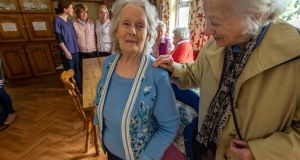 “They wouldn’t let me go home, but I was too well to stay in hospital,” says Margaret Sheehan, describing a dilemma that eventually comes to a lot of Irish people.

For most people, there are no easy answers. Some call on their families. Some rely on the services of a homecare provider, frequently subsidising hours provided by the HSE out of their own pockets.

Many end up moving to a nursing home – sometimes before they are ready for it, or really need that level of care.

When Sheehan found herself in that position 17 years ago, however, there was another option. She had been hospitalised for treatment for a condition that affected her mobility and though she was recovering, she wasn’t able to go home.

“Climbing the stairs was very hard. So Sr Celestine brought me here and I’ve been here since. I’ve never looked back. I think an awful lot of people are in nursing homes that needn’t be there, if they had a place like this.”

The place in question is Charleville Sheltered Housing Services, which opened in 1991. A cluster of 28 single occupancy bungalows built around a central group home, a short walk from the centre of town, it offers different tiers of independent living in a supported environment.

All of the residents get a four-course lunch daily. Then, depending on their needs, they can opt for different levels of care, up to 24/7 carer support in a private room in the group house. There are 22 staff employed at the service and 40 per cent of the running costs are funded by the HSE, with the remainder coming from the residents who pay rent according to their care package.

The idea for the service came about during Sr Celestine Farrissey’s 30 years’ working as a public health nurse in Charleville and later in the McAuley Nursing Home, which she had been instrumental in setting up.

“There were a number of people who were in the nursing home and as they got better they wanted to go home. But they had nowhere to go,” she says.

A conversation with the relative of a patient inspired her to organise a day trip in 1987 to Dublin to see Margaretholme, a sheltered housing organisation set up by the Dublin Central Mission in Sandymount which was one of the first of its kind in Ireland. “There was a local senior citizen group and we all took the train up, about 14 of us,” says Sr Celestine.

What they found in Margaretholme was a place where its 30 residents could live independently in their own unit, behind their own front door, but in a supported environment. It was exactly what Sr Celestine had been imagining. So she decided to bring it to Charleville. “I’ve no patience,” she says, “but I’ve huge persistence”.

It took her a year to get Charleville Sheltered Housing Services set up with the help of a committee of volunteers, many of whom would go on to sit on the board of the registered charity.

Others, like Geraldine O’Mahony – who helped out in the early days, using her free travel to collect documents from the government departments by hand – have ended up living in Charleville Sheltered Housing themselves, where her chronic chest condition means she now needs the full care offered in the group home. “I went to all the departments – Health, Social Welfare, Environment. And I wouldn’t leave until they gave me what I was coming for,” says O’Mahony.

The volunteers’ persistence paid off. The Department of the Environment put up 80 per cent of the construction costs; Cork County Council provided additional funding, support and planning, and the bulk of the rest of the funds were raised by the community. JP McManus chipped in, writing off a bank loan towards the construction costs of €100,000.

“We were at every bazaar and flag day and concert and race, you name it,” says Sr Celestine. “Everybody knew it was going back into the town.”

The first 14 independent houses and the group home – for residents with higher care needs – opened in April 1991. Since then, a further 11 homes have been added, and there are three bright, spacious new homes under construction, bringing the development to 28, double its original size.

Prospective residents are means tested and, if they can afford to do so, they pay a capital contribution of €21,000 towards their home which is refundable on a sliding scale for up to six years. The home is theirs for as long as they need it.

‘It’s not what you have’

“If I had a farm or if I had a house or something, but I had these needs, I shouldn’t be excluded just because I have money. It’s not what you have, it’s what you need,” says Sr Celestine. The margins are tight, and the service could always do with more state funding, she adds.

Phil Cummins has been here just two years – the average length of stay is eight – since the stairs became too difficult at home. “It was the best move I ever made.”

She was successfully treated for breast cancer last year, “but they only kept me in overnight. They sent me back here the next day”.

She couldn’t believe the care she got from the nurses and Sr Celestine. “Breakfast in bed every morning.” The people who live here are like family, she says.

“We just do whatever it is to keep them in their own home as long as possible. We collect their pensions or their prescriptions for them,” says Margaret Farrissey, Sr Celestine’s niece, who is helping to run the services. “If they’re in hospital, we visit them. We can do their laundry for them. We’ll bring in a hairdresser or a chiropodist. We hold Mass weekly in the group house.”

And because it’s located right in the centre of Charleville, for many of the residents, living there has meant more freedom, rather than less. “There are some who’ll be in and out of town every day,” says Margaret Farrissey. “There was one lady who hadn’t been well at all and I saw her one day down in the Aldi at the other end of town. She got down with her rollator and she was delighted with her bit of independence.”

They go on day trips too, says Helen Buckley, who has been living here for 14 years, since her husband died. She lists them off: Galway, Salthill, Knock, Macroom, Maynooth, Tralee, Killarney, Mitchelstown. “I love it here, it is my second home.”

What does she love about it? “Well looked after. Nice people. Beautiful lunch. It’s better than a hotel, really.”