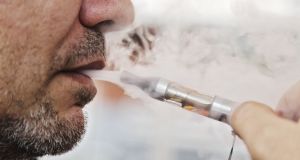 Representatives from US health agencies said they have not linked the illnesses to any specific product and that some patients had reporting vaping with cannabis liquids. Photograph: iStock

The US Centers for Disease Control and Prevention (CDC) said on Friday it had identified 193 potential cases of severe lung illness tied to vaping in 22 states as of August 22nd, including one adult in Illinois who died after being hospitalised.

The Illinois patient’s death was disclosed during a news conference held by officials at the Centers for Disease Control and Prevention, the Food and Drug Administration and the state of Illinois.

They did not provide details about the patient’s identity, saying only that the person was an adult who had vaped recently and then succumbed to a severe respiratory illness. Health officials did not say what product the patient had used, whether an e-cigarette or other vaping device; nor did they specify what substance was vaped.

The CDC has been investigating a “cluster” of lung illnesses that it believes may be linked to e-cigarette use, although it has not yet been able to establish whether they were in fact caused by vaping.

E-cigarettes are generally thought to be safer than traditional cigarettes, which kill up to half of all lifetime users, according to the World Health Organization. But the long-term health effects of vaping are largely unknown.

In a briefing with the press, representatives from health agencies, including the US Food and Drug Administration (FDA), said they have not linked the illnesses to any specific product and that some patients had reporting vaping with cannabis liquids.

Mitch Zeller, director of the FDA’s Center for Tobacco Products, said the agency is analysing product samples from states, to identify any potentially harmful constituents that may be triggering the illnesses.

He said health agencies are trying to learn which specific vaping products were used and whether they were being used as intended or mixed with other substances.

“Those kinds of facts need to be strung together for every single one of these cases, so that we can see if any other kinds of patterns have emerged,” Mr Zeller said.

The number of potential cases have more than doubled over the past week. On August 17th the CDC said it was investigating 94 potential lung illnesses in 14 states.

Brian King, deputy director of research translation at the CDC’s smoking and health division, said it is possible there may have been earlier cases that health agencies had not identified.

“The bottom line is that there’s a variety of things in e-cigarette aerosols that could have implications for lung health,” said Mr King, adding that none of those compounds have been directly linked to the recent hospitalisations.

In a statement on Thursday, Gregory Conley, president of the American Vaping Association, said he was “confident” the illnesses were being caused by devices containing cannabis or other synthetic drugs, not nicotine.

Patients have reported difficulty breathing, shortness of breath and sometimes chest pain before being hospitalised. Some have shown symptoms like vomiting, diarrhea and fatigue.

“The severity of illness people are experiencing is alarming and we must get the word out that using e-cigarettes and vaping can be dangerous,” Illinois department of public health director Dr Ngozi Ezike said in a statement earlier.–Reuters and NYT