Cluster among golfing group in Midlands a 'significant Covid-19 incident' 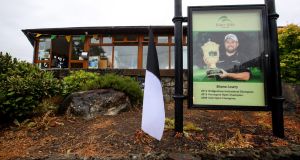 Up to 20 golfers on a holiday in the midlands have tested positive for Covid-19 prompting the HSE to issue a circular detailing their movements to GPs practising in the region.

The letter, sent out on Wednesday, explained that a group of 40 people had stayed at the Bridge House Hotel in Tullamore, Co Offaly, between September 6th and 10th.

While there, they played golf at Esker Hills and another club course.

Doctors were also informed that “some socialised in various places around the town”, specifically identifying three pubs and one restaurant.

Describing the situation as a “significant Covid-19 incident”, the letter went on to say that as many as half of the group had subsequently tested positive for the virus.

As a result, close contacts have been identified and asked to restrict their movements. Up to 100 members of staff at the hotel where the group stayed are being screened.

“All hotel residents, most likely from other areas of the country, will be contacted to say they have been in contact with a case and to contact their GP if they develop symptoms of Covid up to September 24th,” the circular read.

In a statement, the Bridge House Hotel said the health and safety of employees and guests was it s number one priority.

“Since reopening we have worked tirelessly to ensure a safe environment in line with the all Government public health guidance, including from the Department of Health and the HSE.

“However, regrettably, we confirm that we have been notified by the HSE of a confirmed cluster in a group of guests who stayed at our hotel last week.

“We are working closely with and co-operating fully with the HSE. All potential close contacts are being contacted by the HSE. All staff members are also being tested as a precautionary measure.

“In the interests of health and safety, we have decided to close our hotel temporarily as a further additional measure.”

Local GPs were informed that, as of Wednesday, the infection had been limited to the group in question. The letter does not identify where they came from.

“If, from testing, new notifications and further history, we determine there is transmission of infection beyond this group either to staff or guests, we may contact others who have eaten in any of the restaurants or drunk at the [hotel] bar and ask them to contact their GP if they develop symptoms,” it said.

“This is likely to be a significant number of people from the Tullamore community, and you may therefore get queries.”

A HSE spokeswoman did not immediately reply to requests for comment on the content of the circular, which has been seen by The Irish Times. However, it said separately that it did not comment on individual cases.

Esker Hills proprietor Ray Molloy confirmed that 14 members of the group played the course on Monday, September 7th, but as the clubhouse was closed due to Covid restrictions, they did not consume any food or beverages and had no direct contact with any staff of the golf club.