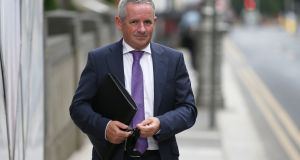 HSE chief executive Paul Reid described the UK’s testing and tracing system as being ‘in almost collapse’ and said it was ‘shutting down’ swabbing centres. Photograph: Nick Bradshaw

The Health Service Executive (HSE) has turned down a request from Britain’s national health service to process tests for it in Irish laboratories.

Mr Reid described the United Kingdom’s testing and tracing system as being “in almost collapse” and said it was “shutting down” swabbing centres.

He said he was unable to accede to the request due to the demand for processing of Irish tests.

The volume of testing in the community by the HSE increased by 70 per cent last week, Mr Reid told a HSE briefing on Thursday. The service carried out its one millionth test on Wednesday.

The average end-to-end turnaround time for testing and contact tracing is currently 2.3 days, while the time from swabbing to test result is 26 hours on average. More than 76,000 tests have been completed this week and over 8,580 contact tracing calls made.

Serial testing in meat factories has restarted after a three-day hiatus caused by a surge in demand for community testing last week, officials said. The positivity rate in meat plants is 0.4 per cent while in nursing homes, where serial testing is also ongoing, it is 0.2 per cent.

Serial testing in direct provision centres has begun, with one positive so far out of 500 tests performed.

Mr Reid was speaking as the latest official figures showed one more person has died of coronavirus and a further 240 cases have been confirmed.

Acting chief medical officer Dr Ronan Glynn pointed out that half of the cases (119) were in Dublin, while there was also a growing age profile among those catching the virus.

The latest figures reported on Thursday evening by the Health Protection Surveillance Centre mean the death toll in the State has risen to 1,789. Confirmed cases have now breached the 32,000 mark, climbing to 32,023.

“Act now to save lives. Limit your contacts as much as possible,” Dr Glynn said. “Assume you and those you meet are infectious, keep your distance and do your part to keep others safe.”

Mr Reid said the HSE’s winter plan, to be published next week, would provide more detail on future bed and ICU capacity.

Asked about the resignation of Dr Martin Feeley, clinical director of Dublin Midlands Hospital Group, after he had criticised the “draconian” response to the virus, Mr Reid said Dr Feeley’s decision to resign was his own and he had not sought it.

With the number of positive cases overall increasing by 39 per cent over the past fortnight, Mr Reid said the trend in new cases was “consistent, rising and concerning”.

If we stay on the current path, things “will only get worse”, he said.

Equally, though, it would not be good for the health service to go back to lockdown, according to Mr Reid.

There are now 73 cases in hospital including 14 in ICU, the highest level since mid-June.

Hospitals were beginning to see wards “frozen” due to virus cases, thereby impacting their capacity as winter approached, while some nursing homes are struggling to find staff, the HSE boss said.

Some nursing homes have been unable to accept patients from hospital because they have cases.

Mr Reid urged people to “take stock”, to “think as if you were a positive case”, wear a mask, radically reduce their social contacts and follow public health messages as part of the national effort to curb the rise in cases.

Mr Reid said a “stronger, unified voice” was needed on public health messaging, as there had been “a lot of commentary that gets side-tracked into side-shows”.

Ireland “can’t let happen” what was currently unfolding in the hospital systems of France and Spain, he said.