Covid-19: 414 new cases reported over weekend, including 234 in Dublin 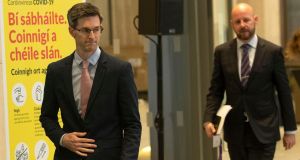 A total of 414 new cases of Covid-19, including 234 in Dublin, and three further deaths from the disease were reported by the National Public Health Emergency Team (NPHET) over the weekend.

NPHET was notified of 255 new cases on Sunday, the second highest daily number since May, and 159 on Saturday. These bring the total number of confirmed infections to 30,985. The death toll now stands at 1,784.

The proportion of infections in Dublin, accounting for 56.5 per cent of the latest cases, is running at a higher level than the county’s overall 47 per cent share of cases since the start of the pandemic.

This will put focus on the capital as the Cabinet considers whether tighter local restrictions should be imposed when the Government sets out its medium-term plan on managing Covid-19 on Tuesday.

Gardaí stepped up high-visibility patrols in Dublin in response to the rise in cases as State authorities warned the city and county faced a “critical moment” in the fight against the virus.

The Garda said that increased policing would involve officers on foot, in cars and on bikes throughout the county “to support the public health guidelines, particularly in relation to social distancing and gathering in large groups”.

Deputy Commissioner John Twomey said it was “vital” that people living and working in Dublin, as well as those visiting, limit their social interactions, maintain social distancing, wear face masks in shops and on public transport, and avoid gathering in large groups.

Taoiseach Micheál Martin said that reducing social contacts, including in people’s homes, would be a “key ingredient” in the Government’s plan given the disease was spreading in households. He denied the Government was reacting too slowly by waiting until Tuesday to introduce restrictions when Covid-19 infections were rising significantly.

“We will be acting decisively,” Mr Martin told RTÉ’s The Week In Politics, adding that the restrictions on households would be official guidance rather than regulations or laws.

Just over two thirds of the infections reported on Sunday were in people aged under 45. A third of the confirmed cases were associated with existing outbreaks or in people who were in close contact with a confirmed case. Some 27 per cent of the cases were identified as community transmission.

Waterford had the second highest number of cases after Dublin in the latest figures with 22 infections, followed by Donegal (13), Wicklow (11), Limerick (nine), Kildare (eight) and Clare (five). The remaining 31 cases were spread across 13 other counties.

“This schedule has been developed and informed with guidance from HSE Public Health. Those facilities or areas which are deemed higher risk will be scheduled as early as possible within the four-week programme,” a HSE spokeswoman said.

Testing is being rationed after a surge in referrals from GPs for people showing symptoms last week pushed the testing system to capacity of between 14,000 and 15,000 tests a day. This forced the HSE to postpone scheduled mass testing of meat plants where outbreaks were responsible for local lockdown restrictions being imposed in counties Kildare, Laois and Offaly.

Meanwhile, the HSE’s winter plan, at €600 million, is expected to be the most expensive blueprint of its type in the history of the Irish health service. It will seek to increase capacity in the main hospitals – to take account of Covid-19 restrictions.

In addition to the cost of the winter plan, a further bill of €1.5 billion is expected for the provision of personal protective equipment for health service and key personnel for the winter and next year.