January 14th, 2019: The Oireachtas committee on health will this week begin hearings into the financial over-run at the planned new National Children’s Hospital which is now expected to cost more than €1.7 billion more than twice the original estimate of €650 million. 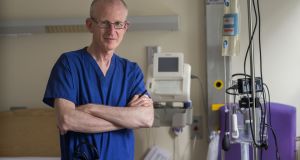 The review into the cost overrun at the national children’s hospital should be widened to look at why it was decided to locate the project at St James’s Hospital, a prominent doctor has said.

Prof Chris Fitzpatrick, former master of the Coombe Women & Infants University Hospital, also predicted that the promised maternity hospital to be built adjacent to the children’s hospital at St James’s would never materialise.

Members of the last government and St James’s Hospital should be asked to account for their actions in locating the project on the current site, he said.

As reported by The Irish Times at the time, the location of the children’s hospital was switched at a late stage from a privately owned greenfield site at the Coombe, but close to St James’s, to a more confined location further west, on the St James’s campus.

“I think the public need to know that there was a much cheaper option on the table in relation to St James’s Hospital, very reluctantly supported by St James’s because they didn’t own this much larger site and wouldn’t be able to control it in the same way,” Prof Fitzpatrick said.

The greenfield site was a compromise between the current site and a rival one at Connolly Hospital, near the M50, in terms of price, size and co-location with a maternity hospital, he said.

“Those involved in developing the proposal saw ourselves as responding to a national crisis and we shared our plans with Connolly and St James’s. We didn’t see it as a competition. From what was reported in the media the day before and the morning of the decision – the hospital was going to be built here. But something happened. St James’s was not at all happy about it.”

“Let’s not delude ourselves that we’ll get a world-class hospital for the €2 billion; there’ll never be a co-located maternity hospital, there’s no room to expand and the traffic will be awful. The people who say ‘this is going to be world class’ are the same people who are in charge of the costs.”

Prof Fitzpatrick was master of the Coombe at the time the decision was made to locate the children’s hospital at St James’s.

Asked why the decision was made, he replied: “All I know is that it appears the plug was pulled at the last minute.”

The Connolly for Kids group, which campaigned for the project to be sited at Connolly Hospital, has also called for the PwC review to revisit the decision to place the hospital at St James’s.