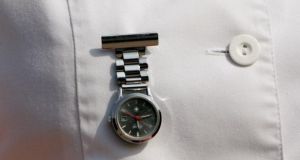 The Psychiatric Nurses’ Association says given the shortage of staff there would be insufficient nursing personnel to operate all services when the overtime ban was introduced.

A day after nearly 40,000 nurses staged a one-day strike, some 6,000 psychiatric nurses are on Thursday putting in place an overtime ban that could impact community mental health services.

The Psychiatric Nurses’ Association (PNA) said given the shortage of staff there would be insufficient nursing personnel to operate all services when the overtime ban was introduced. The union has also said that where the full complement of staff was not available for a shift, the union’s members would not work.

It suggested the Health Service Executive (HSE) may seek to use managers to fill gaps and to redeploy nursing staff from the community to acute services.

The HSE has said where there is a challenge in staffing an acute psychiatric unit or other residential mental health facility, it has available options. These include the assignment of nurse managers to patient care duty; redeployment of psychiatric nurses assigned to day and non-essential services to patient care duty in the residential mental health services; and seeking to negotiate a limited co-operation with overtime where there remains a gap.

Peter Hughes, the general secretary of the Psychiatric Nurses Association (PNA), has acknowledged it is not clear what impact today’s ban on overtime will have, but he warned many community services may be affected and that senior nurse management may have to work to provide cover.

The problem with recruitment and retention or nurses will not go away, he told RTÉ’s Morning Ireland.

This is compounded by the “huge reliance” on overtime in the mental health services, he said.

While the Public Service Pay Commission has said it does not believe that pay has anything to do with the retention of staff, Mr Hughes disputed this, adding that vacancy rates have increased by 40 per cent over the past year.

He said the Bring Them Home campaign begun last year resulted in only six psychiatric nurses returning from the United Kingdom.

Mr Hughes said any proposal would be brought to members for consideration but added they have not received any yet despite spending three days at the Workplace Relations Commission last week without any negotiations taking place.

Mr Hughes said overtime is voluntary and therefore cannot be construed as industrial action. The issue can be resolved, and there should be no penalty on staff who take part in the ban, he said.

Members of the Irish Nurses’ and Midwives’ Organisation (INMO) staged a 24-hour strike from 8am on Wednesday and plan another stoppage on Tuesday, February 5th. The PNA is threatening full strike action the following week.

The nursing unions are seeking pay parity with other graduate-entry groups in the health service such as physiotherapists who they maintain receive about €7,000 more per year. The unions contend that such pay increases are essential to tackle recruitment and retention difficulties in the health service. However, the Government is holding a hard line saying that bringing nurses up to the levels of other specified healthcare workers would cost €300 million a year plus €120 million in reduced working hours. It also fears that any lee-way it gives to the nurses would quickly lead to the unpicking of the public sector pay agreement with claims from unions representing other sectors.

Government sources expect that there will be further contacts with nursing unions over the weekend in an attempt to avert two further work stoppages by nurses and midwives scheduled to take place next week.

However, the Government remains absolutely opposed to any general pay increase for nurses because of fears it would undermine the existing public service pay deal and lead to a spate of knock-on claims by other groups of State employees.

There is concern in Government that it would be extremely difficult to resolve “because the two sides are so far apart”.

“We’ve no choice, we have to hold out,” Government sources said on Wednesday night.

Housing the dominant issue in seven-way general election debate 23:55
‘There’s so much change that people want and that they didn’t get’ – Zappone 23:45
Brexit: Michel Barnier says EU ‘will not turn its back’ on North 21:48
Fine Gael pledges four further technological universities 21:35
Gardaí may have to wait days to interview mother of McGinley children 21:32