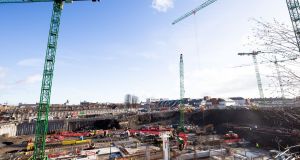 A view of the construction site of the national children’s hospital. Photograph: Tom Honan

Legal experts have cast doubt on the Government’s plans to make individuals accountable for the cost overruns at the national children’s hospital.

Proposed changes to the terms of reference of a review designed to allow for “naming and shaming” of individuals involved in the project will add greatly to the time and costs involved, they say.

The terms of reference given to consultants PwC last week for its review of the cost overrun exclude findings of personal culpability but Taoiseach Leo Varadkar and Minister for Health Simon Harris said at the weekend they would be changed to allow people to be held accountable.

On Monday, Mr Harris said PwC would not sanction individuals but would go “as far as they can” in identifying weaknesses and it would then be up to Government to take action.

Barrister Paul Anthony McDermott SC said an inquiry which had the power to make findings of individual accountability could prove to be “slow, though not impossible”.

He said: “You have to be sure you are offering fair procedures to those affected if you are planning to name and shame. Everyone has a right to their good name, so you can’t do it on the back of an envelope.”

People affected by such an inquiry were more likely to approach it legalistically, he warned. They would have the right to see all documents, and to involve a lawyer. Issues of compellability would arise if they chose not to co-operate.

“A very high level of procedures would be needed, particularly if the report produced at the end was a final one.”

Mr McDermott said there was often a tension between politics and law in such cases. “Politics wants quick answers, delivered cheaply, but often law has an opposite tension.”

David Kenny, assistant professor of law at Trinity College Dublin, pointed to the ongoing case in which former minister for justice Alan Shatter legally challenged the findings of a report by barrister Sean Guerin on his handling of complaints of the Garda whistleblower Sgt Maurice McCabe.

The Court of Appeal, in upholding Mr Shatter’s case, found his right to fair procedures had been breached, even though the Guerin report was not statutory or final, Prof Kenny said.

“That means the PwC review, even though it is informal and non-statutory, would have to behave in a way that was fair to the people involved, where findings could be made against them.”

The case had been appealed to the Supreme Court, so the question has not been fully resolved, he said.