January 30th, 2019: A 24-hour strike by nearly 40,000 nurses and midwives belonging to the Irish Nurses and Midwives Organisation is taking place nationwide. A further five 24-hour strikes have been scheduled over the coming fortnight. Video: Bryan O'Brien 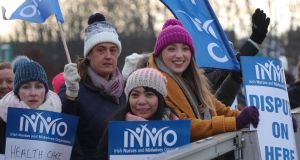 Nurses on the picket line at Connolly Hospital Blanchardstown in Dublin on Wednesday. Photograph: Colin Keegan

Government sources expect that there will be further contacts with nursing unions over the weekend in an attempt to avert two further work stoppages by nurses and midwives scheduled to take place next week.

However, the Government remains absolutely opposed to any general pay increase for nurses because of fears it would undermine the existing public service pay deal and lead to a spate of knock-on claims by other groups of State employees.

Following the 24-hour stoppage by members of the Irish Nurses’ and Midwives’ Organisation (INMO) on Wednesday, about 6,000 psychiatric nurses will put in place an overtime ban on Thursday. This, they maintain, could lead to the curtailment of some community mental health services.

The Psychiatric Nurses’ Association (PNA) said given the shortage of staff there would be insufficient nursing personnel to operate all services when the overtime ban was introduced.

It suggested the Health Service Executive may seek to use managers to fill gaps and to redeploy nursing staff from the community to acute services.

The HSE has said where there is a challenge in staffing an acute psychiatric unit or other residential mental health facility, it has available options. These include the assignment of nurse managers to patient care duty; redeployment of psychiatric nurses assigned to day and non-essential services to patient care duty in the residential mental health services; and seeking to negotiate a limited co-operation with overtime where there remains a gap.

“At this point in time, management in each of the community healthcare areas is continuing to make the maximum staffing arrangements for Thursday with the least level of disruption possible. Until we actually see the commencement of the shift on Thursday morning, it is difficult for us to accurately set out any possible disruption.”

Nurses are seeking pay parity with other graduate-entry healthcare professionals such as physiotherapists who they maintain receive about €7,000 more per year.

Government sources maintain the dispute could be resolved “but not with general pay rises”.

There is concern in Government that it would be extremely difficult to resolve “because the two sides are so far apart”.

“We’ve no choice, we have to hold out,” Government sources said on Wednesday night.

There is also a concern within Government at the cumulative effect of a wave of strikes on the health service including on the numbers waiting for procedures and for outpatient clinic appointments.

If there is no prospect of a breakthrough in the INMO dispute,the HSE is expected to begin cancelling thousands more appointments scheduled for the next strike day on Tuesday.

There is also the potential of further cancellations having to be made in relation to appointments scheduled for next Thursday if the dispute remains unresolved.

This would add to the pressure on the health service in rescheduling appointment times for the patients affected.

It is also likely that the health service will face two further strikes by staff in the National Ambulance Service in the weeks ahead, as part of a continuing row over trade union representation rights.