Anti-vaping legislation sought as 19 deaths and over 1,000 lung injuries reported in US 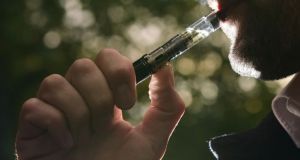 The Bill will also make it illegal for under-18s to sell vaping products. Photograph: PA Wire

The sale of e-cigarettes to children is to be banned under legislation Minister for Health Simon Harris will bring to Cabinet later this month.

The Public Health (Tobacco Products and Nicotine Inhaling Products) Bill will prohibit the sale of “vapes” – tobacco- and nicotine-inhaling products – to persons under the age of 18.

It will also make it illegal for under-18s to sell such products. And the legislation will introduce a new licensing system for the retail sale of these items.

Despite significant progress in this area, tobacco remains one of the greatest challenges in the area of public health

Mr Harris will present a draft scheme or initial outline of the Bill to Cabinet for approval for full legislation.

The Minister said this week that 6,000 deaths a year in Ireland are caused by smoking.

In the United States, 19 deaths and more than 1,000 lung injuries have been attributed to vaping.

A vaporiser or electronic cigarette is used to inhale vapour made from liquid, concentrate or dry herb.

“Tobacco use has been estimated to cost Irish society a total of €10.7 billion annually in healthcare, productivity and other costs,” the Minister said.

“Despite significant progress in this area, tobacco remains one of the greatest challenges in the area of public health.”

Mr Harris said the legislation would help reach the goal of a tobacco-free Ireland by 2025. Tobacco-free means fewer than 5 per cent of the population smoking. An estimated 22 per cent of Irish adults are smokers, made up of 18 per cent who smoke every day and a further 4 per cent smoking occasionally, approximately 830,000 people in total.

The Minister said the tobacco industry continued to adapt and “we must ensure it is not able to lure our children into this deadly addiction and we must continue to highlight the dangers tobacco poses”.

Last week Fianna Fáil leader Micheál Martin said greater urgency was needed to deal with the growing problem of vaping because of the numbers of young people getting hooked on e-cigarettes.

The former minister for health who introduced the smoking ban in 2004, described the tobacco industry as one of the most “evil” sectors that had “consigned millions to their death”.

Mr Martin highlighted the research from the Centres for Disease Control in the US about the deaths and injuries from vaping.

The Fianna Fáil leader said in the Dáil the tobacco industry was using the same strategy in vaping that it used with cigarettes by getting young people hooked with colourful, flavoured products and he could not understand how the industry was allowed to develop in the first place.

As well as a ban on the sale of vaping products to under-18s, he called for all advertising of these items to be prohibited as well.

Taoiseach Leo Varadkar agreed more urgency was needed on the issue but he said “there are lots of things that people do that are bad for your health that we don’t necessarily restrict them or ban advertising for them”.

He stressed that they had to look at the science and listen to the healthcare experts.