Gynaecology services to be reviewed at Letterkenny hospital 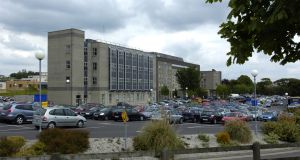 Letterkenny University Hospital. The review chairperson will examine alleged delays in the diagnosis of endometrial cancers and the way postmenopausal bleeding was assessed in the hospital. File photograph: Tervor McBride

A review of the safety and quality of gynaecology services at Letterkenny hospital is to be carried out, following allegations of delays in cancer diagnoses for women patients.

The review is to be led by an independent, external chairperson, who will examine alleged delays in the diagnosis of endometrial cancers and the way postmenopausal bleeding was assessed in the hospital.

The terms of reference of the review, and the membership of the review panel, will be decided in the coming weeks, HSE chief clinical officer Dr Colm Henry has confirmed.

Dr Henry said this week that following a case involving a delayed diagnosis of endometrial cancer, improvements were made, including having a dedicated clinic to deal with postmenopausal bleeding and a nurse to track referrals, assessments and investigations to make sure there would be no further delays.

However, the Saolta hospital group had decided to order the review “in view of concerns”, he said.

Bristol-based hospital consultant Dr Margaret Mac Mahon had called for a review following the death of her sister Carol in 2015. She says her sister’s endometrial cancer was missed at the hospital when she complained of pains in 2010, and was diagnosed only in 2012.

Saolta admitted in a report on Carol Mac Mahon’s death that there was a delay in diagnosing her endometrial cancer due to “a series of failings”.

“This delay resulted in missed opportunities to provide her with the treatment she required in a timely manner.”

In a letter to Minister for Health Simon Harris last month, Dr Mac Mahon said previous local and national investigations into her sister’s case “ignored all principles of clinical governance”.

“I stated I had been reliably informed that my sister ‘was not the first’ and repeatedly requested a local case review but this was declined.”

According to Dr Mac Mahon, “this is about serious governance, administrative and medical performance issues within the hospital/region”. Women with suspected gynaecological cancers should be directed “elsewhere, including to Derry” if necessary, pending the outcome of the review.

A second case, similar to her sister’s, in which a women says her cancer was missed, has since emerged, according to Dr Mac Mahon. Meanwhile, she says, a third woman is currently attending a private clinic in Derry due to concerns regarding her clinical management in Letterkenny.