System for dealing with medical errors ‘not fit for purpose’ – Scally 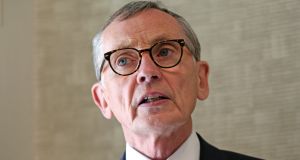 The system for dealing with medical errors in Ireland is “not fit for purpose” and requires far-reaching reform, the author of a State-commissioned report into the CervicalCheck controversy has said.

Dr Gabriel Scally, who is Honorary Professor of Public Health at the University of Bristol, told the Health Management Institute of Ireland (HMI) annual conference on Wednesday that patients in particular are left with no option other than to pursue legal action in what he called a “gladiatorial” setting.

“The system at the moment is not fit for purpose. I don’t think it helps; right from the way doctors are trained, the guidance from the medical council, to open disclosure and protected disclosure policies.”

He said currently patients only have litigation open to them “to find out the truth of what went wrong. Until that changes, we’re not going anywhere”. He said there were simple steps available to improve matters, as well as more fundamental legislative reforms needed. Simple reforms such as no fault compensation schemes and agreed expert evidence would improve outcomes in legal proceedings, he said.

“The current system is deeply flawed. The legal system takes an error and converts it into an injustice, and then converts that into a financial sum.”

Dr Scally said in his experience, patients want to be told the truth of what had happened, receive an apology, and be assured the same thing will not happen again to someone else. “It’s so adversarial and in my view it’s impossible for patients to come out of that legal gladiatorial contest with those three things they want answered”.

He warned, as well, that “changes in the system will not be good news for or be welcomed by those who currently make significant livings from litigation ... There are vested interests that will be very loud on the subject”.

Dr Scally also flagged issues within CervicalCheck and the wider health service which he discovered while investigating the controversy. “My job in six weeks was to narrow down the field of vision, identify what the nub of the issue was. Yet when I opened up this pandora’s box, there was no narrowing it down, there was hardly a bit of the system where I didn’t find serious problems ... and hardly a bit of the system that didn’t need to be changed,” he said.

He said the failure to inform patients about errors in their treatment within Cervical Check were “catastrophic, and the catastrophe came about when rushed and botched attempts were made to disclose and some of those disclosures were made in an appalling way.”

He also criticised what he described as a “witch hunt” by the media and politicians which led to a “toxic atmosphere” and hurt efforts to keep CervicalCheck working, as well as a culture within the health service which sought to find an individual to shoulder the blame for the controversy.

“It was amazing how people interpreted accountability ... what they really meant was someone would be pilloried. They had to find someone to blame and someone to pillory.”

He recounted one conversation with officials in the HSE who he felt were seeking to appoint blame to individuals, which led him to warn: “Just because I grew up in West Belfast doesn’t mean I believe in punishment beatings.”

He said he was pleased with progress in implementing the recommendations of his report, and praised the new leadership of the HSE, including Paul Reid, who he described as “a very good chief executive”.

“They have a hard task to change the culture of an organisation, but there was so much that wasn’t right in terms of the systems in place that there’s a great opportunity”.