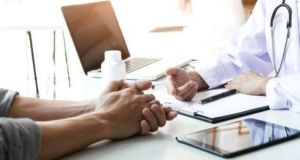 Substantial buffers of medical supplies have been put in place

People from Northern Ireland who fall ill while in the EU post-Brexit will be able to access the same health benefits available to citizens of the Republic under new legislation approved by Cabinet.

The legislation will ensure people from the North enjoy benefits similar to those currently provided by the European Health Insurance Card after Brexit, according to Minister for Health Simon Harris.

The new rules were approved by Cabinet on Tuesday and the Government hopes they will be passed into law by the Oireachtas before the end of this month, Mr Harris told the Oireachtas health committee on Wednesday.

Under the new arrangement, the Government will assist people from the North with the cost of medical treatment in other EU states even after the UK has left the Union, he explained.

Mr Harris said “enormous work” has been done by health bodies to ensure minimum disruption in the event of Brexit. Substantial buffers of medical supplies have been put in place and there was no need for anyone to stockpile drugs, he said.

Mr Harris said the winter plan for the health service would be published shortly. He said all at risk groups and health professionals should get the flu vaccine, which he said would offer enhanced protection.