Less than a quarter of nursing homes compliant with regulations

Report from Hiqa cites concerns over fire safety, evacuation procedures as a concern 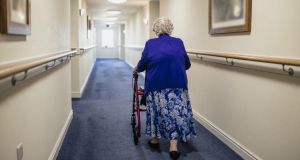 Just 123 of the 581 nursing homes in the Republic were found by inspectors of the Health Information and Quality Authority to be fully compliant with regulations. Photograph: iStock

Less than a quarter of nursing homes were fully compliant with regulations set by the State’s health watchdog when inspected last year.

Just 123 of the 581 nursing homes in the Republic were found by inspectors of the Health Information and Quality Authority to be fully compliant with regulations.

An overview report from Hiqa cites concerns over fire safety and evacuation procedures as a particular concern, and says it referred some homes to fire safety authorities.

It also says older people should not be disadvantaged because they are living in a nursing home, and services available to them free of charge in the community should also be available to them when in residential care.

Nursing home owners say there are “significant delays and a lack of priority” for their residents when seeking access to medical card services such as physiotherapy or chiropody, or surgical aids such as wheelchairs and walking sticks, according to the report.

Welcoming this finding, Nursing Homes Ireland, which represents private operators, said it had continually highlighted the “discrimination” faced by residents when accessing services.

Although progress is being made in some areas, the report says the physical environment in some nursing homes is not conducive to providing person-centred care in a dignified and safe manner. Many HSE-run nursing home are in older buildings but were given a five-year extension in 2016 on a deadline for upgrading their premises.

The Hiqa report says residents’ privacy is not always respected and it also expressed concerns over the lack of Garda vetting for staff in some nursing homes. Half of all HSE-run nursing home failed to comply with the regulator’s requirements in relation to Garda vetting.

At the end of last year, there were 31,251 residential places for older people in nursing homes, up about 500 in a year. Some 51 nursing homes had more than 100 places and the largest unit had capacity for 184 people.

Private operators run three-quarters of all nursing homes, while the HSE or HSE-funded bodies run the rest. With ownership of private units undergoing consolidation, the report warns policymakers must be mindful of the country’s dependence on a smaller pool of large-scale private providers to cater for an increasingly ageing and dependent population.

Six of the State’s nursing homes have been fully compliant with Hiqa regulations for the past year, and another 14 were compliant for two out of the last three years.

Hiqa says it took enforcement actions last year against a “small number” of providers, some of which required further actions, such as the placing of conditions on their registration.