Your nature queries answered: From death caps to cross-bred ducks

Plus: Insects discovered on a Christmas tree and buzzing camellia flowers 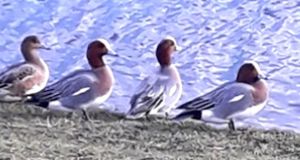 These ducks have been in Tymon Park, Dublin, for a couple of months

What are the most poisonous mushrooms?
Damien Maguire, Maynooth, Co Kildare
Fly agaric and other Amanita species such as the death cap and the destroying angel; webcaps, Cortinarius species. See nifg.org.uk/edible_fungi.htm.
___________________

This was a wonderful sight recently on the clifftop at Downpatrick Head. What is the plant growing on the mounds?
Anne Lavin, Knock, Co Mayo

These ducks have been in Dublin’s Tymon Park for a couple of months. They have brown heads with a white strip running from the top of the head to the beak. Any idea what they might be?
Carmel Lynch, Terenure, Dublin 6W
They are most likely to be last year’s flock of a mallard hybrid with some other duck. Mallards cross-breed with dozens of other ducks, and each hybrid will look different. I found one photo online that had a strong resemblance to yours. It was a mallard/muscovy duck hybrid.
___________________

I couldn’t identify this bird, which I saw at the Botanic Gardens in the autumn. It had a reddish-brown chest and back with blue barring on the wing edge and a lot of white underneath.
John Thompson, Sutton, Dublin 13

On February the bees were busily buzzing on the camellia flowers in Killarney.
Carmel Hourican, Muckross, Co Kerry