Why is partially-treated sewage leaking into Dublin Bay? 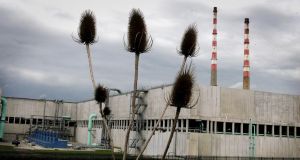 Ringsend wastewater treatment plant serves the greater Dublin region and has a notorious reputation for not complying with environmental standards and incidents resulting in discharges into Dublin Bay.

What is causing partially-treated sewage from Dublin region to leak into Dublin Bay?

The plant treats approximately 40 per cent of Ireland’s public wastewater but has been operating at over capacity and not in compliance with national and EU environmental regulations for many years.

Built in 2005, the sewage treatment plant is the largest in Ireland. Although it was designed to cater for a population equivalent of 1.64 million people, it currently treats wastewater for the equivalent of 1.9 million.

As a result, the treatment system is constantly overloaded.

Treated sewage effluent is regularly discharged into the bay at an outfall in Poolbeg, 1km away from the plant. Overloading is worst after a period of intense rain, as happened this week – or prolonged rainfall.

Why is the infrastructure not able to cope with heavy rain?

After heavy rain, sewage volumes build up and have to be diverted into storm water holding tanks. Once the rainfall eases, its contents are usually fed back into the treatment system.

If volumes remain high, the waste is screened to remove solid material and serious pollutants and then discharged into the bay.

Has this happened before?

These type of incidents take place 15 to 20 times a year, according to Irish Water. They are usually in winter when they have less impact on users of the bay.

Earlier this year, Irish Water was criticised for failing to notify bay users after a failure at one of the large processing tanks at the plant, which caused a discharge of sewage sludge into the lower Liffey estuary at Poolbeg over an eight-hour period.

Storm water overflows were released untreated into Dublin Bay in October 2017 due to adverse weather conditions as a result of Storm Brian.

Separate problems persist at adjoining Merrion and Sandymount strands due to two polluted streams, (including untreated sewage) connecting to the bay at these locations. As a consequence, bathing restrictions will continue there throughout the summer.

What can be done to stop it happening?

An Bord Pleanála granted planning permission in April for an upgrade of the Ringsend plant at a cost of more than €400 million.

Innovative technology will be used to remove pollutants using aerobic granular sludge (AGS), which allows for a greater amount of wastewater to be treated to a higher standard within the current plant.

Significantly, the upgrade will increase the population equivalent by 400,000, and allow for population growth in coming decades.

The plant will be tested to the full because climate disruption in coming years is likely to see more frequent extreme rainfall incidents, increased flooding and more intensive storms. A plant to cater for all rainfall volumes would be prohibitively expensive.

To date, Irish Water has invested some €100 million in the project, which includes advance work to prepare the site for the upgrade; improvements to the odour treatment facilities, and trialling the AGS technology. It is expected to be completed in 2020.

Theft and drugs top list of offences dealt with by Probation Service 22:01
Teenage boy dies at Powerscourt Waterfall in Co Wicklow 21:54
‘John Hume came out for us that often, Derry needed to come out for him’ 21:09
Dignitaries send tributes to Hume funeral from around the world 20:41
Newly-appointed Junior Ministers will not get special advisers 20:33