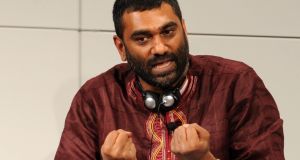 The global capitalist system and an associated patholgical illness called “affluenza” is the biggest threat to humankind rather than coronavirus or flu, the human rights campaigner Kumi Naidoo has said.

Mr Naidoo, a former secretary general of Amnesty International, said he wished to speak with honesty and highlight that humanity is in deep trouble, but without suggesting that it was too late to act.

He said the children of Africa who do not have fridges or electricity were least to blame, and faced the worst consequences.

“If we don’t get this right – within the next 10 years – the problems of today will look like a Sunday morning picnic,” he said.

Mr Naidoo said that if everybody was to live to the EU average, three to five planets would be needed. But he underlined that casting this scenario as one of gloom and doom was not helpful and “would just drag everyone down”.

There was, he said, cause for real optimism in the fact that “the energy debate is won” and fossil fuel use is declining, even though some in the sector wanted to stretch out their use till the end of the century.

Nonetheless, governments and oil companies would face an avalanche of litigation in coming years on the basis they knew long before this of the impacts of fossil fuels on the planet.

Right to be happy

In giving Amnesty’s top award to Greta Thunberg, Mr Naidoo said he had underlined her right to be happy and to do ordinary things like play sport. He said his regret in fighting apartheid in South Africa was the loss of his childhood too early and this was why it was worth considering what makes a happy life, especially in protecting children’s future.

He said young people were “crying out across the world for action” on the climate crisis – “our entire house is on fire” – yet politicians and big business did not have the capability to address it.

As a consequence of greed and inability to share resources, the poor, working classes and people of colour were suffering most, he added.

Mr Naidoo said that even in the World Health Organisation’s worst case scenario for the coronavirus, the number of deaths would come nowhere near those caused by the climate crisis already. The science could not be denied, he said, adding that the status quo could no longer apply and that energy, food and financial systems need to be changed.

He said the world was facing a leadership crisis but he was lucky in that he came from South Africa which had a leader in Nelson Mandela “who was not crazy, who was loved and made an impact internationally”.

Mary Robinson had fulfilled such a role in the Irish context, he believed.

Mrs Robinson paid tribute to Mr Naidoo’s ability to not shirk from outlining the scale of the climate crisis and yet provide hope.