When it comes to litter, where is Ireland’s black spot?

Kilkenny tops rankings, but almost a quarter of towns surveyed were in some way littered

November 5th, 2018: Swimmers at the Forty Foot in Sandycove speak about the 70 kgs of “tooth-pick sized” plastic that were recovered from the area at the weekend. The plastic was used in the reconstruction of of Dun Laoghaire Baths. Video: Kathleen Harris 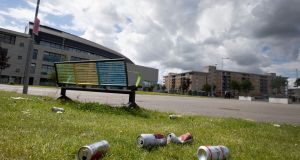 Ballymun in Dublin was deemed a litter black spot and placed at the foot of the Irish Business Against Litter anti-litter league rankings. Photograph: Tom Honan/The Irish Times

Almost a quarter of Irish towns assessed by An Taisce have been found to be littered, with Ballymun in Dublin classified as a black spot after inspectors recorded one of the worst reports since the ranking system was created.

The heritage group inspected 40 Irish towns in accordance with international grading standards as part of the Irish Business Against Litter (Ibal) anti-litter league. It found 31 of them, or 77 per cent, to be clean, which was in line with recent surveys.

The car park at Ballymun Shopping Centre was described as “a complete eye sore right in the centre of Ballymun”, while Balbutcher Lane was not just littered, but subject to dumping. The same was said to be true of Shangan Road.

“As the Ballymun and other results show, there has been little if any progress in disadvantaged areas of our cities,” said Ibal’s Conor Horgan. “The gap between these areas and the commercial high footfall commercial city centres is widening.”

Bags are an antiquated form of collection which lead to dumping

Kilkenny topped the rankings for the fifth time, ahead of Athlone and Killarney and the centres of Dublin, Cork, Galway and Waterford were cleaner than previously, with only Limerick failing to achieve “clean” status.

Portlaoise, Tralee and Letterkenny enjoyed their best-ever showings in the survey and were among 14 towns deemed cleaner than European norms.

“Bags are an antiquated form of collection which lead to dumping,” said Mr Horgan. “All too often they are left out for long periods on the street and attract other people’s waste. In addition, they are prey to the growing problem of gulls or vermin damaging them in the search for food. Bins present an altogether neater and more hygienic solution.”

A house on Seville Place in Dublin was used as a dumping ground, with “a mattress and all manner of rubbish” present.

Galvone in Limerick city south was deemed littered but improved significantly on its previous result, while the Mahon in Cork and that city’s north side remained littered.

Dumping continued to feature prominently and accounted for many of the individual black spots found in cities.

Limerick City’s rating was brought down by dumping in the basements of Cecil Street and an area at Upper William Street, described as “filthy, one of the worst sites in a city centre environment”.

Elsewhere, a car park at Lakelands View in Mahon in Cork was “in a shocking state, clearly used as a dumping ground for domestic rubbish . . . soiled nappies and several dozen black sacks”.

The best and worst: Litter by the numbers