Michael Viney: Live by the sward

Researchers have turned to the promise of multi-species grassland 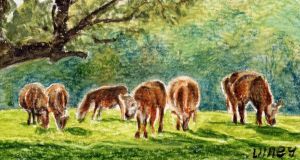 Ruminant animals such as cattle burp some 40 per cent of greenhouse gases. Illustration: Michael Viney

In a sheltered corner of the acre, shaded by trees, grows a patch of grass that has to be “wild”, since it has never been dug, reseeded or fertilised, and rarely grazed.

I have been watching it grow for weeks, held by its eerie composure, each vivid green stem perfectly vertical, closely separate from its neighbour, the shadows latticed between.

At half a metre tall the tips began to thicken and waver into flower, the one time you can begin to tell one kind of grass from another. Some bore a tight spike, bristling with stamens; others a soft weave of awns, silkily strokeable to a fine point tinged with pink.

The Grasses of Ireland, the great guide from John Feehan and Helen Sheridan (Teagasc 2012), helped confirm the first as meadow foxtail, the second as meadow fescue, its spikelets still waiting to branch into flower. Both were relics of old and permanent grassland, before grass was ploughed and industrialised.

Both species, too, were ranked high in nutrition for livestock. But today, like the fescues and Yorkshire fog, cocksfoot and sweet vernal grass (“a lavender-like flavour” notes Feehan), they have vanished from the silage meadows. With them went three centuries of farmer knowledge “effectively and prematurely smothered by an almost exclusive concentration . . . on input-dependent ryegrass swards”.

Lolium perenne, permanent ryegrass, is among the oldest of fodder grasses, with early and abundant foliage, and beaten for nutrition only by meadow foxtail. By the late 19th century, the most valuable grasslands were a ryegrass-clover mixture, an option increasingly revived today.

Ryegrass hungered for nutrients, often exhausting the soil, and the cheap artificial fertiliser of the late 20th century seemed the answer. Today, fertiliser costs have risen and rivers need protecting from its nitrogen. Teagasc researchers have turned to the promise of “multi-species grassland swards”.

The right mixtures of seed, including red clover and other nitrogen-fixing legumes, “can markedly outyield perennial ryegrass monocultures”, with low inputs of added nitrogen, or give the same results with even less.

Including timothy grass (similar to meadow foxtail), and herbs such as ribwort plantain and chicory has had mixed results. And multi-species swards can raise “challenges of mid-season digestibility”.

Which brings us to the belches of cows.

As part of European research, Teagasc and UCD researchers are exploring “rumen microbiome and methane emissions”, and a quite engaging summary, from the agency’s latest TResearch journal, can be summoned online.

The rumen is one of the four chambers of the cow’s stomach. This is where an ecosystem of various microbes, including bacteria, archaea, protozoa and fungi, acts on the chewed-up plants “in an orchestrated manner” to help the animal to extract its nourishment.

Unfortunately, one group of the archaea (a very ancient type of micro-organism), produces methane, 28 times more potent in the atmosphere than CO2. It prompts ruminant animals such as cattle to burp some 40 per cent of greenhouse gases, and costs them some of their dietary energy.

The new research suggests that animals making the best metabolic use of their feed belch the least methane. They also retain more dietary nitrogen from protein, so that raising their tails to excrete leads to less nitrous oxide, “a gas that has a global warming potential 265 times that of CO2”.

To monitor the methane in belches of different animals, some 400 beef cattle are being studied at the Kildare test centre of the Irish Cattle Breeding Federation. Each is given a unique radio tag and enticed to feed within range of a fan that extracts the air round its head and passes it over analytic sensors.

Using DNA biomarkers, the idea is to select animals “with a greater genetic propensity to efficiently utilise feed while minimising their impact on the environment”. Breeding from these, it’s suggested, will supply cattle which are “wholly consistent with the goals of FoodWise 2025, the Government’s road map for . . . the Irish agri-food industry”.

This could take some time. Meanwhile agricultural and marine scientists in Australia and California have found that adding a small amount of a leafy red seaweed to the feed of cows reduces their methane output by more than 90 per cent.

The algae is a feathery, warm-water seaweed, Asparagopsis taxiformis. From Prof Mike Guiry and his website at seaweed.ie I learn that a similar, cooler-water relative, Asparagopsis armata, an introduction to Europe from the southern hemisphere, arrived in Galway in 1941. Each summer, it now grows in bushy, barbed plants in some sandy pools along the west coast.

Dr Stefan Kraan, a former post-graduate student of Dr Guiry, co-founded a Galway-based seaweed company that is growing Asparagopsis armata in Co Kerry and Co Sligo. It is helping trials of the additive in the Netherlands dairy industry, and testing for the best yield of bromoforms, compounds that inhibit the rumen's production of methane.

Let’s find out, first, what this close relative of the Californian seaweed might do for methane burps.