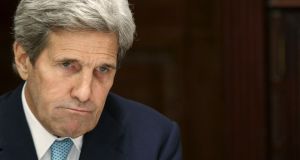 US senator John Kerry will deliver the keynote address at the Our Ocean Wealth Summit in Cork on Monday. Photograph: Brendan McDermid/Reuters

Ireland and other countries across the world are failing to play their part in adequately preventing the destruction of oceans, which is contributing to climate change, former US secretary of state John Kerry has said.

Speaking to The Irish Times in advance of attending a summit on protecting oceans in Cork on Monday, Mr Kerry said fossil fuels, where possible, should be kept in the ground and that the world has to reduce its dependency on gas in eliminate carbon emissions by 2050.

The former US presidential candidate is leading a global effort to scale up the establishment of marine protected areas (MPAs). This is against the backdrop of oceans producing half the world’s oxygen, feeding clouds that provide freshwater, and helping to regulate climate.

“It brings us food, creates jobs, and even helps make medicines. Water is life, and 97 per cent of it is contained in our seas,” he said when announcing the initiative last year.

He said his main message in Cork would be that “world leaders are not doing enough to protect oceans” and not recognising sufficiently the “interconnection” with climate disruption.

Mr Kerry said destructive and illegal fishing practices were being facilitated by lawlessness on the high seas, with more than 90 per cent of the world’s stocks either fully fished or over-fished. He also noted that 13 million tonnes of plastic makes its way into oceans each year.

He said there was a combination of threats, of which climate change was the overriding one.

He said there would be no blue economy if such threats were not addressed.

Mr Kerry will deliver the keynote address at the Our Ocean Wealth Summit, which is being attended by delegates from 90 countries, including representatives of 30 island states which are most vulnerable to rising sea levels.

MPAs were the key mechanism to rehabilitate oceans, he said, “but, to be honest, it requires enforcement” – going beyond simply naming an MPA and pretending illegal fisherpeople will not exploit it. He said that was where global effort was needed, and deployment of the marine equivalent of the “blue helmets in the UN”.

Mr Kerry said Ireland had to step up, with just 2 per cent of its waters protected, the second-lowest proportion in Europe. But he was aware the Government wanted to do more, and noted the Seanad had last year passed a motion calling for the Government to protect half of Ireland’s seas and ocean with community-driven MPAs.

“Ocean health is declining at an unprecedented rate. To halt and even reverse this decline, science shows we need to protect 30 per cent of our ocean in fully protected marine reserves,” he added.

Asked about the Government continuing to issue exploration licences, he said the global warming scenario meant “we have to keep as much [fossil fuel] as possible in the ground”.

In moving to a low-carbon economy, he said there was a need for realism underpinned by a clear plan and timetable.

Major economies such as India, China and the US were not getting the job done, and still persisting with coal in some cases. Undeterred, he added: “I’m not in politics and public life not to get the job done.”

As a former chair of the Arctic Council, he was aware of great efforts to protect ecosystems in both the Arctic and Antarctica, where ice sheets were melting four times faster than a decade ago, while oceans globally were warming at a 40 per cent faster rate.

That meant sea level rises of several metres over the next 30 to 40 years threatened the survival of places such as Bangladesh, Pacific islands and Florida.

The response hinges on believing the science and being prepared to listen to the best scientists, Mr Kerry said, rather than “highly-paid stooge studies that are industry gimmicks to prolong the status quo”.

Mr Kerry’s term in the Obama administration was marked by adoption of the 2015 Paris Agreement which, he said, was nowhere near where it needs to be in terms of implementation.

Under the agreement, it was accepted that keeping global warming to within 2 degrees would not happen without subsequent political leadership in stepping up ambition.

Instead, he said, the world had got US president Donald Trump, who is “a force for retrograde action”, which has had a profoundly negative impact globally.

While US states, major corporations and cities were pushing ahead with a strong climate action agenda, it was insufficient. The world was still heading for disaster, though political leadership and “mission innovation” in finding ways to reduce emissions meant the ability to respond was there.

His efforts to mobilise leading ocean advocates from every corner of the globe, to support countries’ efforts to secure and implement MPAs, was at an early stage, he said, and there was “still not enough awareness”.

Kids are making a difference, walking out of school and demanding their parents act

But Mr Kerry said he was an optimist and woke up every day convinced “this can be solved”, if there was political willingness and leadership. He is emboldened by the world’s success in curing diseases once thought to be incurable and the reduction of levels of extreme poverty in most parts of the world.

Mr Kerry said he has no room for despair, believing there is something that everybody can do “once you figure out what your role is going to be. Kids are making a difference, walking out of school and demanding their parents act. That is a very helpful component.”

Meaningful action could take the form of addressing plastic pollution, shopping sustainably, acquiring an EV or embracing solar PV and feeding the grid. Political leaders, however, needed to do a better job in illustrating to people the way forward.