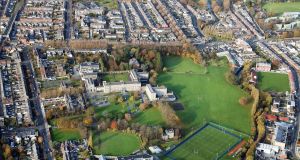 Aerial view of the Drumcondra portfolio.

What factors are driving some of the largest land deals in Dublin?

Declining congregational memberships; the collapse in new entrants to the priesthood; the housing crisis; property values; the cost of caring for the elderly; and a Papal encyclical are all part of the mix.

Whether it be the sale of 19 acres in Drumcondra, in an auction where the guide price is in the region of €100 million, or the sale for €3.5 million of an old retreat house in Howth with grounds that slope down to Dublin Bay, the tills are ringing as the institutional Catholic Church responds to a rising property market.

The process is being driven by a desire by the church and its numerous orders to address the issue of legacy while also providing for the elderly priests, nuns and brothers who make up an ever-increasing proportion of the Irish religious.

And while it is the major land sales that attract the most attention, there are also a large number of smaller deals going on where congregations are handing over property for uses such as social housing, the provision of services, and the housing of refugees and asylum seekers.

A lot of congregations have been left with institutional properties that are expensive to maintain. Often, however, they are located on surrounding lands that are ripe for development.

“The orders are looking at legacy,” said an experienced property adviser to religious congregations, who did not want to be named. “Some of them see their mission continuing through the use of lay people, and they need money for this.”

Another reason for selling is to fund donations to the State’s redress scheme for former residents of religious-run institutions.

The scheme, which was set up in the early 2000s, envisaged 18 congregations providing more than €400 million in money and land to help fund the scheme.

But the financial crash intervened. The pick-up in land values in recent years has renewed interest in selling property and contributing to the scheme, according to the source.

Age is another huge factor. Many of the congregations have memberships where the average age is well in excess of 70. If they want to arrange their orders’ affairs, they know that time is not on their side.

The need to pay for the care of elderly priests, nuns and brothers, some of whom have returned to Ireland after a working life abroad on the missions, is another factor

Sr Liz Murphy, secretary general of the Association of Leaders of Missionaries and Religious of Ireland (Amri), said the factors driving the sales included the necessity to pay into the redress scheme, and other costs that arise from the congregations’ pasts, which she did not want to specify, as well as the shift away from living in institutions to the community.

The ownership of the old institutions can be “burdensome”, she said. “It is a bit like downsizing. It is a generational shift.” For some congregations, the decision to sell can be “heartbreaking”.

Sr Murphy, a former provincial leader of the southern province of the Sisters of Mercy, has studied the issue of “institutional demise” and very much sees the position of the congregations in Irish society in terms of the cycle of life.

The need to pay for the care of elderly priests, nuns and brothers, some of whom have returned to Ireland after a working life abroad on the missions, is another factor.

“They are people who have worked hard, over many years, and they deserve to be looked after now,” she said.

One of the “major, major concerns” for congregations, she said, was “valuing land and property”, as per the papal encyclical Laudato Si, which is focused on climate change, ecology and “care for our common home”. It very much guides decisions by the congregations in relation to land use and the management of buildings, Sr Murphy said.

The congregations have invested significantly in retreat and conference centres. “That is money that is extremely well spent. It provides an opportunity for people to refresh their souls.”

Property has also been transferred to provide for social housing. Currently 14 properties owned by Amri members are being used for the housing of refugees and asylum seekers.

Ageing memberships mean costs are continually rising, while income for almost all congregations is falling. Figures that can be accessed on the website of the Charities Regulator show most orders are running annual deficits.

Fr Martin Kelly, provincial of the Spiritans (or Holy Ghost Fathers) in Ireland, said the average age of his congregation at the end of last year was more than 75 years, and that its annual expenditure greatly exceeded income.

“Our recent decision to sell property at Cross Avenue, which is adjoining but not part of Blackrock College, arises in that context.”

Below are some properties that are up for sale or have been sold recently by the Catholic Church in Dublin.

Offers in excess of €55 million are being sought for 10.4 acres of land which formed part of the Jesuit order’s now closed Milltown Park educational campus.

More than €20 million is being sought for a three-acre site beside Blackrock College. It is being sold by the Spiritan congregation, who are the trustees of the college, and the proceeds are to be used for charitable work, as well as paying off debts.

A price tag of €3.5 million has been put on this property, which includes grounds of 1.6 acres that drop down to Dublin Bay.

The Religious Sisters of Charity said the sale was due to “the inability of our ageing congregation to continue our retreat work, a decline in numbers attending and the need to spend money to modernise the building. We have decided to sell and use the proceeds of the sale to go towards some of the charitable work our congregation carries out at home and abroad.

“The sale will enable us to continue that important work whilst also supporting the care of our sick and elderly sisters.”

There is a price tag of €100 million on the 19 acres that have been put up for sale in Drumcondra, with a new residential quarter for the city being envisaged for what once used to be the Dublin Diocesan Seminary.

The decision of the Christian Brothers to sell part of the land beside Clonkeen College for €18 million led to the school’s board of management issuing proceedings in the High Court. The case was settled last year, with the amount of land being given to the school being increased by half an acre. The playing fields were sold to builder Paddy Durcan Snr.

Campaigners opposed the development of lands beside Our Lady’s Grove Primary and Secondary Schools, on Goatstown Road, which were sold by the Congregation of the Religious of Jesus and Mary in May 2017 for an estimated €13 million. The campaigners were unhappy with the loss of green space and playing fields beside schools in the area.

All Hallows in Drumcondra was a training college for priests from the mid-1800s. The trustees, in deciding to sell the property in 2015, opted to sell it to Dublin City University, so it could continue to be used as an educational institution, rather than sell the property and its grounds for residential development.

A value of €1.6 million was put on a convent gifted by the Mercy Sisters to the Sophia Housing Association in the social housing organisation’s 2017 accounts. The same accounts record that it has, over recent years, been gifted a property worth €397,134, in Ballincar, Co Sligo, by the Daughters of Wisdom; two properties in Castlecomer, Co Kilkenny, worth €205,000, by the Presentation Sisters; as well as property in Killinarden, Tallaght, Dublin 24, worth €550,000, by the Daughters of Charity.

The MKN Property Group is planning to build 79 “residential units” on 2.4 acres sold by the Holy Faith order in 2017. The land, along with a convent building, was put on the market with a price tag of €3 million. The plan is to convert the convent into 11 apartments. The order donated grounds in the 1960s for the adjoining St Mary’s Secondary School, and granted additional lands to the school for sports pitches, prior to putting the convent and remaining grounds on the market.

More than €18 million is being sought for 8.6 acres at Taylor’s Lane, Ballyboden, being sold by the Order of St Augustine. A study has suggested the site could accommodate up to 212 houses, or 436 build-to-rent apartments.

The order is selling the site to support its ministry in Ireland, including making provision for elderly members of the community, and for missions overseas.