Erik Solheim spent more than €400,000 on trips, according to ‘Guardian’ report 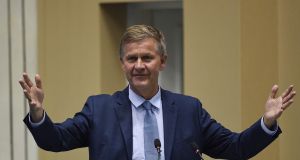 UN environment chief Erik Solheim: ‘I have been and remain committed to doing what I believe to be in the best interest of UN Environment and the mission we are here to achieve.’ Photograph: Money Sharma/AFP/Getty Images

UN environment chief Erik Solheim said on Tuesday he had resigned after receiving a final audit of his official travel.

When asked about Mr Solheim’s travel expenses, Mr Dujarric said: “The secretary-general, I think, is pleased to see that Unep [the UN Environment Programme] is committed to implementing the recommendations that are found in the OIOS [Office of Internal Oversight Services] report on the travel office.”

Mr Solheim, a former Norwegian environment minister, said in a statement that he had decided to resign as executive director of the Nairobi-based UN Environment Programme after receiving the final audit report on Saturday.

“I have been and remain committed to doing what I believe to be in the best interest of UN Environment and the mission we are here to achieve,” he said.

The UN Environment Programme aims to set the global environmental agenda though leadership and partnerships.

Mr Dujarric described Mr Solheim as having been “a leading voice in drawing the world’s attention to critical environmental challenges, including plastics pollution and circularity; climate action; the rights of environmental defenders; biodiversity; and environmental security.” – Reuters