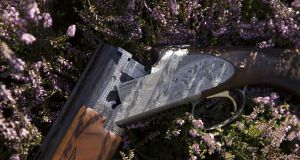 Hunting and conservation: No hunter sets out to return empty-handed but there is more to the pursuit than killing. Photographer: Matthew Lloyd/Bloomberg/Getty

Very early on a recent Sunday morning, Mark Craven took his boat out on Lough Ree. He carefully arranged 30 duck decoys – floating models of mallard and wigeon, plus a swan to make the flock look more natural – on the water.

His aim was to attract wild duck and shoot them. However, though he spent hours waiting quietly, and saw some wildfowl, he never got a shot in.

“But I had a great day,” he says. “It’s all about the enjoyment of being out there. I like the fieldcraft and the challenge of the boat. And something comes out of every hunting trip. That Sunday I think I saw two marsh harriers [birds of prey which are very rare on this lake] so I’m going to back and check them out.”

Another hunter, Derek O’Brien, tells a similar story. He had gone to Scotland to hunt pink-footed geese, a species too rare to hunt here, but increasingly numerous across the water.

“And I didn’t hit one, but it doesn’t matter. The sound of ‘pinks’ coming in over the estuary in the mornings, honking in their thousands, is unforgettable.”

O’Brien was reminiscing after an afternoon out hunting on a neighbour’s farm in north Co Dublin. Again, no shot was fired, but we had the pleasure of watching Tess, his springer spaniel, persistently sniffing out an elusive cock pheasant. Even when flushed, the bird never rose high enough to make a target.

When we tried to follow it to the next field, navigating a hedge and low ditch, O’Brien unloaded his gun. As if it knew the safety drill, the pheasant had in fact moved unseen high into the hedge, just above the ditch. With an explosion of wings and breaking twigs, it launched itself safely into full flight, as soon as we were briefly immobilised just beneath it.

So we had no “bag” to bring home. But, as O’Brien said, we had been out in the fresh air with the dog and we had observed interesting pheasant behaviour. We had also enjoyed seeing many grey partridges – O’Brien is the gamekeeper in charge of their reintroduction to the area. We had seen breathtaking views, across fields glowing in low winter sunlight, all the way to Lambay Island and Howth Head.

Of course, no hunter sets out to return empty-handed. But both men reject the image that hunting is all about killing.

There is also a widespread perception that hostility between hunters and environmentalists is inevitable. Both O’Brien and Craven are experienced and practical conservationists. The National Association of Regional Game Councils, which supports the partridge reintroduction project, points out on its website that “shooting people have a vested interest in investing in conservation and ensuring that . . . [game species] populations are not threatened.”

Nevertheless, the relationship with conservation, as practised today, is obviously far from cosy. The association refers approvingly to “fierce resistance” to “ill-conceived and ill-informed actions of governments” in the same paragraph.

Both O’Brien and Craven do much more hunting for conservation than they do for sport, paradoxical though that may seem. Predators such as foxes have multiplied in recent decades. That makes the odds against some vulnerable prey species, already struggling against extinction from habitat loss, very high indeed.

O’Brien shoots – or traps – foxes, rats, magpies and hooded crows to give the new partridge population a head start against these threats. Craven does similar work as a contractor for the National Parks and Wildlife Service (NPWS) in the midlands.

Craven also works as a volunteer with the Ballydangan Bog Red Grouse Project in Roscommon, a remarkably diverse partnership. It was conceived by the chairman of the local gun club in Moore, Pat Dunning.

“Pat remembered the grouse on the bog as a young fellow, and didn’t want to see them go extinct for want of doing something,” says Pat Fehilly, a fellow club member. Fehilly now co-ordinates a community employment scheme set up on his initiative by the Department of Social Protection to serve the project.

Other partners include local landowners, the Heritage Council, Roscommon County Council, the NPWS, and Bord na Móna, which owns the bog.

David Fallon, an ecologist for the turf company, admits to having been very sceptical when the gun club approached him with its grouse conservation proposal in 2009. He is now one of the projects most active facilitators, and brings your correspondent out for a day on the bog with Fehilly, Craven, and two employees on the scheme, Vincent Flanney and Ryan Nixon.

Nixon surveys the species on the bog. So far, the grouse are not flourishing, with a maximum of five birds present, and no evidence of breeding. Flanney, who has hunted grouse extensively in Scotland, wonders whether an old, infertile cock might be keeping more vigorous young males off the territory.

The whole group agrees that there are still more questions than answers about restoring a viable grouse population to Ballydangan, though increased sightings on neighbouring bogs raise hopes. The habitat has been partially restored through the blocking of drains, through managing the heather to foster the mosaic of growth levels grouse need and through hunting predators.

Gun club members do not believe the numbers could grow to a point where shooting grouse on the bog could be sustainable in the foreseeable future. The same is true for the partridge project. The aim is simply to restore, conserve and expand the populations.

Meanwhile, there is strong evidence that another threatened bird, the curlew, has already benefited from the Ballydangan scheme, with seven breeding pairs now up from two or three in 2009.

The biggest gain, though, may well be the partnership itself. Listening to people from such different backgrounds, exchanging well-informed views and rich information about a landscape they all love, is surely a good pointer towards how we need to starting thinking and acting about conservation in our countryside.

Early modern environmentalists were often hunters. Sir Peter Scott, founder of both the World Wildlife Fund and the British Wildfowl and Wetlands Trust, hunted white-fronted geese, now protected, on the Wexford Slobs as recently as 1948, as Michael Viney noted on these pages.

Scott believed that good hunters develop an almost instinctive grasp of the behaviour and flight dynamics of birds, which non-shooting bird-watchers might envy. He saw no contradiction, for most of his life at any rate, between loving birds and killing them. He expressed his attitude as a predator’s respect for its prey.

“My delight and admiration for wild geese was based as much on their supreme capacity to remain watchful and to look after themselves as it was upon their beauty and grace,” he wrote.

He did acknowledge ambivalent feelings as he grew older. A goose he wounded found refuge on a sandbar. Neither he nor his dogs could reach it. Its protracted suffering upset him deeply. The incident may have him led him to abandon shooting altogether, though this is disputed.

Hunters Derek O’Brien and Mark Craven both say this story echoes their own feelings.

“You will have ‘wingers’,” says Craven. A wounded bird may be very hard to find or reach, “and you do feel guilty, you should do your best to keep on searching for it as long as is realistic.”