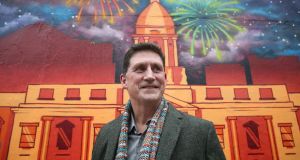 Green Party leader Eamon Ryan: ‘Every flyer being put through my door by rival parties is climate central, everyone cycling everywhere, organic this, flowers and birdboxes galore.’ Photograph: Nick Bradshaw for The Irish Times

Green Party leader Eamon Ryan has rejected a view that a huge proportion of Irish people are not ready to embrace radical action to address the climate crisis and this was why it has not become a major election issue.

He said that while some parties might believe this to be the case, “I don’t think the Irish people are in that place” and that people in Ireland want to “become leaders” on climate action.

Speaking as his party published its climate policy at the Rediscovery Centre in Ballymun, Dublin, Mr Ryan said Fine Gael were laggards on the subject of climate change and it was easier for them to focus on other issues in the campaign.

If one in 10 people voted for the Greens, it would have a transformative effect, he added, “because we will be able to hold those parties to account.”

Mr Ryan said “every flyer being put through my door by rival parties is climate central, everyone cycling everywhere, organic this, flowers and birdboxes galore”.

However, he said they were not willing to fundamentally change the systems of energy, transport, land use and agriculture.

Dublin West candidate Roderic O’Gorman said Sinn Féin’s climate manifesto included calls for fossil fuel divestment and a ban on fracking, which he said had already happened, and sought too little funding given the scale of action needed. He said Sinn Féin’s opposition to carbon taxes ran contrary to evidence showing that the levies play a part in shifting away from carbon-intensive activities, especially within industry.

Dublin Central candidate Neasa Hourigan said the Fine Gael manifesto lacked vision and ambition on climate change, while failing to “reorient the country to the new climate reality, and Europe’s Green New Deal”, with the opportunities and extensive funding that would provide.

The Greens’ policy commits to “a massive extension and upgrading of the rail network” including extensive electrification of existing lines and development of light rail systems in Cork and Galway.

Upgrades would be concentrated in commuter belt counties surrounding Dublin, while rural transport would be overhauled and made affordable.

Also included is an extensive programme of district heating, which uses waste heat, especially from industry, to warm nearby homes and make them more energy efficient while also moving away from fossil fuel use.