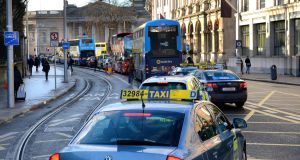 It is understood the measures will remain in place for at least 12 to 18 months, with some likely to be retained on a permanent basis. Photograph: Cyril Byrne/The Irish Times

Dublin’s College Green is set to be pedestrianised – and cars restricted throughout the city – under plans to reopen the city centre as Covid-19 restrictions are lifted.

A joint report from Dublin City Council chief executive Owen Keegan and Brendan O’Brien of its traffic department said “the same level of vehicular traffic cannot be accommodated in the city as before”, and in a number of locations “motorised vehicles” would have to banned after 11am each day.

The report describes the proposal as a “temporary mobility plan” which would be introduced over the next three to six months in line with the Government’s road map for reopening society, published last week.

However, it is understood the measures will remain in place for at least 12 to 18 months, with some likely to be retained on a permanent basis.

Some measures already undertaken by the council to increase space and social distancing for pedestrians, including priority setting on traffic lights to guard against footpath queueing, “actually preclude a return to previous high levels of private car use”, the report says.

Last year 46,000 private cars travelled into the city centre during typical morning peak times. By March 31st that figure had dipped to around 14,000. However, the measures prioritising pedestrians at traffic lights would alone mean traffic would have to be reduced by 40 per cent on last year’s levels.

A council and National Transport Authority working group has been established to oversee the changes. The report said changes may mean removing vehicles after 11am, “ which will assist businesses to reopen by allowing more on-street space for tables and chairs, and also for waiting areas”.

“The temporary closure of College Green and the temporary widening of footpaths along Dame Street would provide space within the city centre for pedestrians, cyclists and for businesses to be facilitated to reopen.”

A full report on the range and location of measures which will “reflect the new reality” will be published in the next two weeks. It will also include measures to widen footpaths on the main corridors, provide for cycling, ensure public transport is safe to use and providing increased space for boarding and alighting at bus stops in the city centre.

“The requirements of social distancing, the reduction of emissions and the encouragement of the active modes require that our temporary mobility plan for the city is not based around any increase in private car traffic,” the report said.

“The changes in our traffic light system to assist pedestrians and avoid build ups of pedestrians at crossings actually preclude a return to previous high levels of private car use.”