'Salads are rotting from the bottom up': Allotment holders eager to salvage crop

Allotment holders are hoping restrictions are lifted and they are allowed to return to their plots on May 18th. Video: Enda O'Dowd 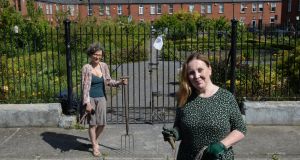 Lettuces rotting in the ground, tomatoes burning in polytunnels and cucumbers breaking from their stems and mouldering into the soil will be among the scenes to greet allotment holders when they eventually return to their neglected plots.

Local authority allotments were shut following the tightened Covid-19 restrictions at the end of March. The Government’s road map for reopening society lists “people working on allotments” among the “outdoor workers” who can return to work from May 18th.

Three Dublin local authorities say they intend to reopen their allotments from that date. However, the Department of Local Government says it has not yet been decided if this “work” provision should include local authority allotments, as opposed to those used commercially to provide produce for farmer’s markets or other retail outlets.

The inability to access allotments, particularly during the recent long spell of dry weather in the east, will have caused “devastation”

Derek Oman, secretary of Dublin Community Growers, says the uncertainty is causing stress for allotment holders, who are eager to try to salvage this year’s crop.

“We’re hearing one thing from the Department of Local Government, and another thing from the local councils. We’ve asked the councils for details of how the reopening will be facilitated, but they haven’t been able to tell us anything yet.”

However, Oman believes allotments should not have been closed in the first place.

“People have always socially distanced in allotments. They aren’t places you go to congregate. In a true sense allotments are community farms and they should be treated in the same way farms have been.”

The inability to access allotments, particularly during the recent long spell of dry weather in the east, will have caused “devastation”, Oman says.

“Salads are rotting from the bottom up. In hot weather people would come and open the doors of their polytunnel, but now everything inside is burning. Peas and beans need to be staked – that hasn’t happened, so they’re gone. Cucumbers and marrows will have broken from their stems. Early potatoes come up through the clay and need to be earthed or else they turn green and are poisonous, so that’s the end of them.”

In addition to the waste, the impact on the mental health of growers is significant he says.

“A lot of people go to their allotments for their mental stability, something that is really important at this time, as well as for their physical health. Not being able to go, and what they will find when they come back … It’s catastrophic for them.”

Niamh Brennan, who is on the committee of the De Courcy Square community garden in Glasnevin, agrees that being able to return to their plots is essential for the mental health of gardeners.

“We have people who have been cocooning, and they’d give anything to be able to come back in and look at their plants growing and just make sure they’re okay.”

The De Courcy gardeners have been lucky, she says, as an allotment holder has been allowed to go in periodically to water the plots, but she says everyone has been anxious to get back to their own patches.

Gardeners have been “losing the plot”, she laughs, “but really everyone has been so good and so patient. These small plots mean the world to people”.

She says the committee does not yet know if the gates will reopen. “We haven’t been told yet, but everyone is hoping that come May 18th the restrictions will be lifted to some extent.”

Dublin City Council, which owns the De Courcy Square gardens, says it will be reopening its allotments on May 18th, having “reviewed the recommendations under the Government road map”. Fingal County Council says it will also reopen allotments. “However, people using them will need to adhere to social distancing requirements,” it adds.

South Dublin County Council says it is reopening them as well and also references social distancing measures. Dún Laoghaire-Rathdown County Council did not respond to queries.

The department says it is “engaging with the relevant bodies” to consider the reopening of local authority allotments but a decision has not yet been made.

1 Face masks: All you need to know about where, when and why you need one
2 Coronavirus: Unwinding of latest stage of roadmap ‘could be pushed back further’
3 Like ‘a grandfather at the sherry cabinet’: Trump’s meandering monologue
4 UK accuses Russia of election interference and trying to steal Covid-19 vaccine
5 Coronavirus in Ireland: Further reopening delayed amid 'worrying' rise in infection rates
Real news has value SUBSCRIBE

‘Drug craze’: Use of laughing gas by under-18s should be banned – FG TD 17:37
Second ever woman elected to chair of Bar Council 17:16
Garda Commissioner disputes claim of journalistic privilege 17:02
Face masks: All you need to know about where, when and why you need one 16:29
Adrian Donohoe murder accused says he cannot place raiders’ accents 16:26