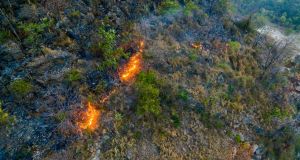 The National Parks and Wildlife Service said the drones ‘will help us establish outbreaks and keep wild fires from spreading’. File photograph: Getty

Drones are to be used by the National Parks and Wildlife Service (NPWS) and Coillte to combat forest and wild fires at “hot spots” in Dublin, Wicklow and the midlands in the summer months.

The semi-state commercial forestry company and the NPWS said the “state-of-the-art technology” allows the drones to become “firefighters’ eyes in the skies” helping to protect the environment and save lives.

The initiative is to be rolled out in Dublin, Wicklow and the midlands, regions that are at high risk of fire and will be used to to “predict, detect and fight forest and wild fires” during high-risk summer season

This will be the second year the technology will be used to monitor designated hot spots across the high-risk areas.

Minister for Heritage Josepha Madigan said wild fires were “not a natural phenomenon” in Ireland.

“As well as having severe localised impact on flora and fauna, setting fires during this time of a national public health emergency is particularly reckless as it places unnecessary additional pressures on our emergency services whose services are critical to managing the Covid-19 pandemic.”

She urged members of the public, including landowners, farmers and recreational users of publicly accessible land “to act responsibly at all times, to be mindful of their own safety and the safety of others, to be mindful of the need to protect property, both publicly owned and privately owned, and to appreciate the value of our natural heritage, particularly in our National Parks, Nature Reserves and designated lands”.

Deborah Meghen of Coillte said the system, which is operated by a network of drone professionals, had already helped reduce fires.

“Last year we used this technology for forest fire protection, which resulted in a significant reduction in forest fires with just over 50 reported, down from 150 in 2018. This represents a very good year in terms of forest damage with only 25 hectares affected, compared with over 600 hectares damaged in 2018.”