Does it matter whether my plants listen to Mozart or Bach?

Michael Viney: Plant intelligence rests in the ways by which they solve their problems 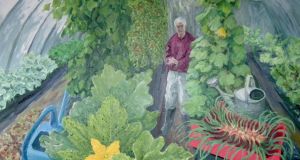 Swinging back the polytunnel door, I wish its leafy occupants a cheery good morning and ask them how they’re doing. Illustration: Michael Viney

My painting below shows the polytunnel, with attendant gardener, in another good summer years ago. I’m still down there soon after breakfast, carrying the radio for Lyric, to tend a rather less ambitious vegetable array.

As always, swinging back the tunnel door, I wish its leafy occupants a cheery good morning and ask them how they’re doing. On further inspection, I may murmur some encouragement to a row of climbing beans, praise the mangetout vines for their first purple flowers and the Russian tomatoes for their yellow ones.

The streak of animism that tempers my appetite for science allows an amiable connection with plants I have raised from seeds. This lent some fellow feeling with Prince Charles when, years ago, he confided that he always talked to plants in his greenhouses, adding that it was “very important – they respond”.

His incautious remarks came in the wake of an American book, The Secret Life of Plants (1973), which offered “the physical, emotional and spiritual relations between plants and man”. Mixing legitimate science on plant senses and behaviour with subjective experiment and spiritual folklore, it achieved a heady readability that earned much media praise and a considerable nod from public culture.

If plants show no special taste in music, they may indeed recoil from its vibrations

Scientists seeking acceptance of the new view of plants met much sceptical reaction that jeopardised funding for their work. With the book’s authors now dead (neither of them were scientists), the popular case for plant senses and intelligence now has impeccable champions.

From Israel, for example, plant geneticist Daniel Chamovitz offered What a Plant Knows: A Field Guide to the Senses of Your Garden and Beyond (2012), of which a generous list is online as a PDF. It persuaded me that whether Lyric plays Mozart or Bach to my polytunnel plants, they are probably deaf to either. Even talking to them just offers a fleeting, if benevolent, breath of CO2.

At Chamovitz’s Tel Aviv University, on the other hand, new experiments described by Itzhak Keit show that tomato and tobacco plants stressed by drought or being cut emit ultrasonic airborne sounds detectable several metres away. If the pinching out of shoots from the oxters of my tomatoes elicits squeals of protest, I am mercifully unable to hear them.

Plant intelligence rests in the demonstrable awareness and responses by which they solve their problems. Rooted they may be, but hardly static, as the many online time-lapse films of growth – the ballet of seedling beans, the thrust of elongating briars – make enchantingly clear.

If they show no special taste in music, they may indeed recoil from its vibrations. They hear approaching insects and react to the munching of caterpillars by flooding leaves with deterrent chemicals. They smell such signals of alarm released by their neighbours.

This is now established in plant science, much of it easily accessible online. It readily bows to the early work of Charles Darwin among the pots of plants in his study: runner beans, cucumbers, nasturtiums, hops; anything that climbed and moved.

Darwin worked with son Francis to study the cellular search-and-curl movement (they called it “circumnutation”) of climbers twirling up poles. As Francis told a science assembly in Dublin: “We must believe that in plants there exists a faint copy of what we know as consciousness in ourselves.” This has developed into today’s “plant neurobiology”, a term disparaged by those scientists who save anything “neuro” for the human brain and its neurons.

Some 99 per cent of Earth’s biomass, as he argues, is that of plants, yet humans have ignored their intricate networks of consciousness

It was the Darwins, in their book The Power of Movement in Plants, who proposed that the tiny tip of the embryo root, first to emerge from the seed, “acts like the brain of one of the lower animals”. Its sensitivity, multiplied at the tips of branching roots, serves as a network of perception and command that guides their navigation through the soil.

Richard Karban in the US and Anthony Trewavas in Scotland are two more of today’s notable scientists absorbed with plant intelligence. But the most vigorous and prolific proponent of the “root-brain hypothesis” is Italy’s Prof Stefano Mancuso at Florence University. Of his lectures on YouTube, “The roots of plant intelligence” in the Ted series is a specially engaging.

Along with scientific enlightenment comes Mancuso’s challenge to human habits in viewing the life of the planet. Some 99 per cent of Earth’s biomass, as he argues, is that of plants, yet humans have ignored their intricate networks of consciousness, granting active intelligence only to an animal brain.

In a corner of the polytunnel, a chair is propped in a bank of fading wallflowers, next to the early potatoes. I rest there, circled by bumblebees, to ponder such reproaches to human history. Our tight co-evolution and reliance on plants, Mancuso observed recently, “might raise the question of who actually domesticated whom”.