Wipes, which are favoured by many for their ease of use, found on 12.2% of our shoreline 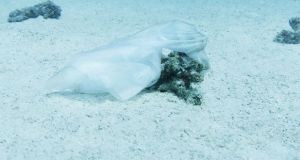 Wet wipes made their debut appearance as a category on the Coastwatch Autumn Survey, which examines 541 sites around the country. File photograph: Getty

Wet wipes have been identified for the first time as a separate category of waste in the list of household materials littering Ireland’s beaches.

A Coastwatch report published on Friday shows that wipes, favoured by many for their ease of use in daily cleaning, have been located on 12.2 per cent of the country’s shoreline.

While many other materials including plastic bottles are on the decline, wet wipes made their debut appearance as a category on the Coastwatch Autumn Survey, which examines 541 sites around the country. They were previously measured as part of sewage material.

Despite their growing prevalence, the report notes wet wipes remain notoriously difficult to find. “The [12.2 per cent] result was judged unreliable from surveyor feedback and almost certainly a significant underestimate,” it says.

“Once wet, wipes form ropes, it is impossible to count them, while those released onto a beach as free floating wipes tend to lie down flat like a plaster on the sand and then get quickly covered by more sediment.

“Those used in the bathroom, replacing or augmenting toilet paper, are the most problematic as an unknown number get flushed down the toilet.”

Coastwatch has been carrying out its annual analysis since 1987; last autumn saw more than 1,100 volunteers trawl hundreds of sections of beach and shoreline measuring at least 500m each.

As this is the first survey to include wet wipes as a standalone item, there is no data on the growth or decline in their prevalence. However, Karin Dubsky, Coastwatch Europe co-ordinator, said there were concerns around their use, which appears to be fuelled by cheap prices.

The report recommends the issue is addressed immediately by way of increased directions on packaging against flushing wipes down toilets as well as a public awareness campaign.

Elsewhere, the data showed 877 tyres were found on one in five sites. Landfill materials were recorded on 16.3 per cent of shoreline while bags, boxes and loose heaps of household refuse were found in 5 per cent.

Despite the range of materials, the survey does deliver some encouraging news. Six of seven categories – plastic bottles, glass bottles, metal cans, bottle lids, plastic shopping bags and cartons – all reduced in volume.

Despite some waste reductions, the report sounds a note of caution in that its findings reflect “a fraction of what is collected in weekly and daily shore cleans all over the island on over 7,300km” of coast.