Greta Thunberg on America: Too much air conditioning, not enough science

Climate activist Greta Thunberg dismisses the suggestion that the US should not tackle climate change if China refuses to, arguing that smaller countries use the same logic with regard to the United States. Video: C-Span 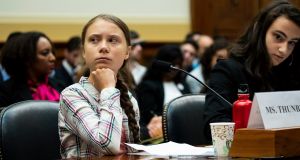 These are some of the things that Greta Thunberg has learned on her American tour. New York City smells. People talk really loudly here, they blast air conditioning, and they argue over whether they believe in climate change, while in her country, Sweden, they accept it as fact.

Also, US lawmakers would do well to read the latest science on the threats posed by climate change.

That’s what Thunberg (16) told members of a congressional subcommittee on Wednesday when she was asked to submit her testimony into the record. She submitted a report issued last October by the Intergovernmental Panel on Climate Change, spelling out the threats of global temperature rise. “I don’t want you to listen to me,” she said. “I want you to listen to the scientists.”

Her remarks lasted barely a minute. “And then I want you to take real action.”

With her typically blunt, often biting remarks, she has offered Americans a sort of unvarnished, outsider’s view of themselves. And she has used the supersize attention she has received in the country to draw attention to her American peers, those young activists who have dutifully organised for climate action in their communities without any of the limelight that she has received.

“She’s been quite selfless in this,” said Xiuhtezcatl Martínez (19) one of the 21 plaintiffs in a landmark children’s lawsuit against the US government. “I’m impressed with that.”

Martínez has joined her in a number of her public appearances in New York and Washington, including at an Amnesty International awards ceremony this week, where Thunberg insisted on being onstage with her peers, rather than by herself. “A huge part of her messaging is, ‘This is not for me,’” Martínez said.

On Wednesday afternoon, Thunberg joined her activist peers as they went to meet with the House speaker, Nancy Pelosi. She didn’t want to say much, recalled Vic Barrett (20), of White Plains, New York, who is also a plaintiff in the children’s climate lawsuit.

“She felt it was an opportunity for the US youth,” Barrett said. “She’s been very clear that she doesn’t feel like all the attention needs to be on her.”

Thunberg once described herself as “the invisible girl”. She has never been fond of small talk. She still speaks very quietly and slowly. But she smiles much more than when she first began gaining media attention a year ago. She is more comfortable at banter, including with Trevor Noah, host of The Daily Show, who asked last week how it was to arrive in New York City after a two-week journey across the Atlantic on a solar-powered yacht.

She recalled the smell. “It was indescribable,” she said, which prompted howls of laughter from the audience, also in New York City.

On Tuesday, speaking to members of a Senate task force, she spoke directly to earnest lawmakers who had commended youth climate activists like her for their courage. “Please save us your praise. We don’t want it,” she said. “Don’t invite us here to tell us how inspiring we are without doing anything about it.”

Jamie Margolin (17), a Seattle-based activist who had been invited to the same meeting, was glad she called them out. “She gives very blunt observations,” Margolin said. “If I had done that, people would’ve thought I was an entitled brat.”

“She comes with an outsider’s perspective,” Margolin added.

Thunberg explained her indignation this way on a CBS Good Morning interview: “We cannot focus on what we can and cannot say now,” she said. “We must speak clearly about what’s happening.”

She has said she wants the global youth protests planned for Friday to be a “social tipping point”.

Her earnestness comes out occasionally, like when she speaks to her peers. She often says she could not have imagined that school strikes, which she helped to inspire, would take off in so many countries. And she often speaks publicly about being “grateful”.

“You will constantly feel like you are not doing enough,” she said last week. “That is a very dangerous feeling to feel especially when you are actually doing everything you can.”

“They are doing the impossible,” she said of her peers. “I am eternally grateful for them.” – New York Times