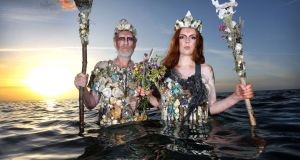 The environmental group wants the Government to bring in measures to reduce carbon emissions to net zero by 2030.

Global sea levels are increasing at an unprecedented rate, with glacial ice melt in Greenland peaking at 12.5 billion tons of water in a single day in July this year.

It emerged last week that Dublin’s Bay sea levels have risen at twice the global average in the past two decades, much faster than initially forecast.

Scientists predict that across Western Europe severe flooding caused by climate change will continue to increase in both frequency and severity, according to a new study by Vienna University of Technology.

More than 60 per cent of the population of Ireland live within 10 kilometres of the coast.

Extinction Rebellion says that with rising global temperatures, large areas of Dublin will become uninhabitable by the end of this century.

It has accused the Government of showing a “complete lack of recognition” of the climate crisis.

Next Wednesday, September 25th, will see the publication of a landmark UN IPCC Special Report on the Ocean and Cryosphere in a Changing Climate publication about the oceans and climate change.

Drafts of the report suggest that it will present an alarming picture of the impact human activity is having on the seas.

An Extinction Rebellion statement said: “The upcoming Budget is an essential opportunity to begin to implement the recommendations of the Joint Oireachtas Committee on Climate Action Report and to start taking meaningful steps towards putting Ireland’s reputation as a climate laggard behind us.

“We invite people of all ages and backgrounds to join us in a series of peaceful, family-friendly actions across cities, countries and continents which aim to force governments to finally respond appropriately to the climate emergency before it is too late.” – PA