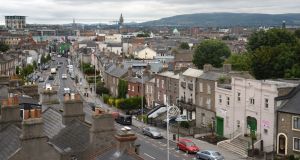 A new plan for how the BusConnects proposals will affect Stoneybatter was outlined at a meeting in Dublin on Tuesday held for community groups along the Blanchardstown to Dublin City Centre route.

The initial proposal for Manor Street was that it would have a two bus lanes and two traffic lanes, but this has now been reduced to three lanes in total.

The reduction in the number of lanes will allow for a new green space outside Kavanagh’s pub, as well as new trees being planted in the Dublin 7 area.

While the original proposals for northbound bus and traffic lanes remain the same, southbound traffic will now go down a single lane, which will only be open to buses and local traffic. Non-local traffic is to be diverted down Infirmary Road.

“We accept that all of the Stoneybatter issues have not been resolved, but we believe we have made progress,” the deputy chief executive of the National Transport Authority, Hugh Creegan, told the meeting.

Local councillor Emer Costello said the issues affecting the area were far from resolved. “We have an enhanced green space at the bottom of Aughrim Street, but its going to be a traffic nightmare.”

Mr Creegan told the meeting that a number of measures were being looked at to address “rat running”, or displaced traffic using side roads through residential areas in order to avoid new traffic restrictions.

Prohibitions on certain turns and the calibration of traffic lights would be among the measures used, with camera surveillance technology being used to punish those who broke the new rules. New legislation would be required.

BusConnects aims to overhaul the current bus system in the Dublin region by creating 230km of dedicated bus lanes and 200km of cycle tracks along 16 of the busiest corridors along with a redesign of the network.

In relation to the proposals for Blanchardstown, he said there were very few proposed changes to the original plans and that there were continuing negotiations with the owners of the Blanchardstown centre.

The meeting heard that trees will most likely have to be cut down to accomodate the plans for the Navan Road, and also that increased northbound traffic is likely for Blackhorse Avenue, up as far as the Ashtown gate. However this would not include heavy goods vehicles.

A number of speakers said there were very close community connections between the residents of the Navan Road area and Stoneybatter, and expressed fears that the BusConnects plans would make travel between the two areas more difficult.

There were also a number of questions about park and ride. Mr Creegan said that there was no point in setting up park and ride centres until public transport options were shown to be quicker than using the car.

A parallel park and ride project was now under way and proposals in that regard would be published early next year, he said. Park and ride “can be developed in tandem, but it can’t go ahead of” [BusConnects], he said.

The restrictions on traffic being proposed would only operate for the time periods necessary to stop public transport getting caught up in traffic congestion.

In relation to the rail services for the Blanchardstown area, he said a Dart service along the Maynooth line was being planned, with tenders going out next week for the rail fleet. He predicted the service will begin in about four or five years.

“We are playing catch up for years and years of under-investment,” Mr Creegan said. “It will take time.”

In response to references to the widespead opposition to proposals across the city, he said BusConnects was going ahead, “because Dublin needs it. But we need to work out the best solutions for the various corridors.”

There were strong criticisms about access to the meetings being restricted to a small number of representatives of each local organisation, but Mr Creegan said that if the meetings are too large, they become ineffective.

He and the other three members of the panel had all travelled to Blanchardstown on the 39 bus. Meetings with representatives from other areas are planned nightly, over the coming three weeks.