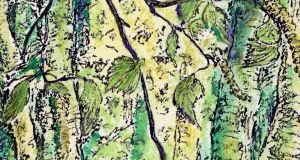 Catkins: such is the way spring rolls across Ireland that birches in Cork are fully clothed well in advance of their Antrim siblings. Illustration: Michael Viney

The silver birch at the ditch was sporting its first leaves on sheltered branches, along with small catkins, stiffly arched and green. Down in west Cork the same day would have found birches fully clothed, catkins dangling in primrose-yellow bloom to offer pollen to the bees. And up in the glens of Antrim the leaves on birches would be few if any, and catkins still tight commas on the twigs.

Such is the way spring now unrolls across the island, southwest to northeast. But spring in the 2080s could be different, the Antrim birches having leaped 10 days ahead while those of west Cork are stuck close to their current calendar. This, at least, is what is suggested by simulations for Met Éireann, exploring patterns of tree growth in a much warmer world, plus the onset of hay fever in those with pollen allergies.

In the late 1990s, when it was clear that climate change was producing an earlier spring, I began to record the progress of budburst, year by year, among the trees of the acre. Like other nationwide volunteers, I visited the same branches each morning, from March to mid-June, to mark a card with a number for the stage of their progress: from the very first swelling of tight-clenched winter buds to the full four leaves out and a confetti of bud scales on the ground.

Such intense acquaintance gives a quite new experience of trees – the astonishing bud-burst of the female sycamore, for example, flourishing fat catkins in rosy bracts, exotic as orchids; or the sudden, overnight leaves of lime, poised on ruby twigs like freshly emerged green butterflies.

Neither rank as a native Irish tree. Our oak grown from a Strasbourg acorn is now in winsome, golden leaf, while the native sessiles have just managed budburst at the bottom (most twigs and the buds on the ash are still hard and black).

My record-keeping lasted less than a dozen springs, its figures thus of small significance. I became depressed at charting change dictated by human activity. Was this passing pessimism, or just a guilty excuse for abandoning a chore? My pessimism has since broadened to regret. How happy was the amateur study of nature, say a century ago, still a time of naive and wondering discovery, unshadowed by the Ides of the Anthropocene, the man-changed world.

For science, however, phenology, studying the timing of changes in nature, is still a prime tool in charting the impact of climate change. Records of Ireland’s tree life, from budburst to fruiting to leaf fall, are produced in 16 phenological gardens across the country, planted with clones of European tree species as part of an international network. Eleven more gardens have native species alone.

Records kept by naturalists in the 1800s, my coveted age of innocence, have also helped to measure the changing natural calendar. Sprays of blackberry plants kept in the herbarium at the National Botanic Gardens from 1852 to 2007 have shown significant advances in flowering and fruiting.

As the phases of life in nature’s species respond differently to the pace of climate change, there is a potential “mismatch” of vital timings.

Scientists in the UK have shown how great tits nesting in oak trees can miss the hatch of the leaf-nibbling moth caterpillars they need as food for their young. In Ireland, 36-year records of some 60 moth species showed that many are emerging earlier, their advance ahead of leaf unfolding and bird arrival, all a potential for mismatch as temperatures rise. Our overwintering whooper swans, on the other hand. are leaving for Iceland sooner, having fed sufficiently on Ireland’s earlier crop of grass.

From the heart of Dublin, meanwhile, comes a booklet to remind me of the pleasure of a lunchtime wander in spring around the grounds of TCD: the fourth and most polished edition of Trees of Trinity College Dublin (€8 from the college’s library bookshop and science gallery). Each of the scores of species has an aluminium number on its trunk, plus a profile in the booklet, a spot on its maps, and maybe one of the many fine images.

Brought together from many parts of the world and nourished remarkably on soil filled with medieval rubble, some species were by no means suited to urban arboriculture. In the seven years since the booklet’s last edition, the oldest maples have succumbed and storms have culled some of the rest.

The college’s botany department has produced both this booklet and much current Irish data of phenology. “Disturbing climatic trends are becoming evident,” says the preface, “with increasing temperatures, greater incidence of drought and increasing frequency and intensity of storms. Planting plans for the future must take these trends into account.”

How sad for the wildlife of the temperate world – and for us – that spring should ever come too soon.

Murdered mechanic was subject to threats before his death, inquest told 18:28
Number of homeless people drops below 10,000 18:15
Election 2020 outtakes: Varadkar’s crafty cup switch 17:51
Tourists with plans to travel to China should be able to cancel at no cost 17:19
Mother of three McGinley children appears in court charged with their murder 17:08