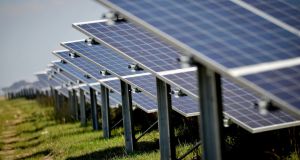 Renewable energy: One of the committee’s priorities would be to ensure the carbon tax is applied in a fair manner as Ireland transitions way from being a high fossil fuel-intensive industry. Photograph: Tim Ireland/PA Wire

The Government will oversee an extensive consultation process on carbon taxes in the coming months. The process will be led by the Departments of Finance and Public Expenditure and Reform, according to the chairwoman of the Oireachtas Committee on Climate Action Hildegarde Naughton.

It follows publication of its report, Climate Change: A Cross-Party Consensus for Action, which was submitted to the Government on Thursday.

A critical aspect of the consultation will be to examine how the tax will be returned to citizens, she confirmed. This would be by way of a “fee and dividend” cash payment, a tax rebate or in the form of ringfencing funds for green projects. The committee will also evaluate how best to implement the tax changes.

One of the priorities would be to ensure the tax is applied in a fair manner as Ireland transitions from “high fossil fuel-intensive industry” to the widespread use of renewable energy, she said.

The committee agreed that carbon tax be increased from €20 per tonne of CO2 to €80 per tonne by 2030, provided supports were in place for those experiencing fuel poverty or heavily reliant on fossil fuels.

Ms Naughton said that committee members agreed there was a need to look after people on low and middle incomes, and those in rural areas who would be worst affected by decarbonising the economy. Additional measures would be needed for those who would lose their jobs in the transition.

Asked if there was a risk that the tax would prompt protests, she said the committee had achieved a broad consensus on increasing it a fair way, which would facilitate the Government and future governments in pursuing this course. “That backing is in place,” she said.

Setting the trajectory, Ms Naughton said, would provide a clear signal to businesses, especially those providing renewable technologies, such as solar panels. It would also give citizens the time to make “new choices” on how they live and travel to work in a low carbon economy.

Fianna Fáil spokesman on climate action Timmy Dooley said his party had insisted that prior to the introduction of any increase in carbon tax the Government would have to introduce specific policy measures to protect those who may not be able to transition away from fossil fuels due to fuel poverty.

“Additionally, any taxes raised from a carbon tax will have to be ringfenced in legislation and used to assist those in fuel poverty and to increase supports and incentives to assist people to change their behaviour away from the usage of fossil fuels.”

He added: “The window to act on climate change is closing rapidly. Our younger generations are rightly demanding urgent coordinated action from the Government. This report is a good report which sets forward the pathway to address the massive climate issues we face.”

Ireland had been without a coordinated strategy to tackle its growing emissions and coming under increasing pressures from Europe, Mr Dooley noted. “This Government needs to understand that delayed action only means higher costs and greater burdens which will fall heaviest on the next generation.”

The employer body Ibec said the committee “has achieved some success in taking the politics out of climate policy”. It acknowledged the need for additional incentives and regulatory measures “including a predictable carbon pricing trajectory”.