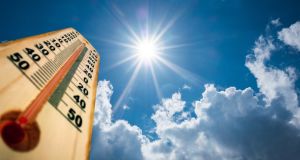 The cross-party committee recommends scaling up adoption of renewable energy.

The Climate Action Committee report on addressing climate change has 40 recommendations, adding up to a fundamental redirection in how Ireland responds to accelerating impacts of global warming.

It sets a climate policy framework for the next 15 years, elevates the issue to a level on a par with economic and budgetary policy, and re-casts Ireland’s emissions reductions targets in line with scientific advice with a view to the country decarbonising by mid century.

The cross-party committee recommends scaling up adoption of renewable energy, the retrofitting of hundreds of thousands of homes, bringing down agricultural emissions, and facilitating greater community involvement in moving to a low-carbon existence.

It is recommending new climate legislation be adopted to set a net zero emissions target for 2050; a 70 per cent target for renewables on the electricity grid by 2030, as well as mandating five-yearly “carbon budgets” from 2020 onwards, which in effect would set a limit on national emissions.

Carbon budgets, it says, should be determined by a new Climate Action Council superseding the existing Climate Change Advisory Council (CCAC), with enhanced powers and resources. It would report to a new standing Joint Oireachtas Committee on Climate Action with similar powers to the Committee of Public Accounts in holding public bodies to account on climate action.

Key issue: Legislation needs to be robust enough to ensure there are sustained carbon reductions achieved over coming decades, and no undermining of agreed measures when there is a change in government.

The committee agrees by majority decision to ring-fencing carbon taxes for specific climate actions. It also agrees with the advice from the CCAC that the price of carbon should increase to at least €80 per tonne of CO2 by 2030 once measures are in place to support the less well-off.

Key issue: A large increase in a carbon price, if improperly handled, risks a water charges scenario, if not gilets jaunes on the streets of Ireland. It must be fair.

The committee warns of over-reliance on beef and dairy production and endorses 28 actions proposed by Teagasc but highlights the absence of an implementation plan.

It calls on the State to promote the potential to store carbon in the landscape through native broadleaf woodlands, maintaining hedgerows and rewetting bogs .

Key issue: Re-directing agriculture will have to address a disconnect between rapidly expanding dairy and beef sectors (in line with growing global demand for Irish produce) and an emissions trajectory showing little indication of being reversed.

A Green Party proposal for a 2-to-1 spending on public transport over road infrastructure was rejected because of concerns about impact on funding for rural roads, though its call for a minimum of 10 per cent expenditure on cycling infrastructure in transport programmes is accepted.

The committee recommends setting up a Just Transition Task Force to address the needs of regions and sectors most likely to be impacted by climate action.

It acknowledges those who will be worst affected: farmers; workers in the Midlands reliant on Bord na Móna and the ESB for jobs in peat production and power generation, and those on low income who will be hit by a rise in carbon tax because of reliance on fossil fuels.

Key issue: A difficult transition is imminent – hundreds of workers in the Midlands are going to lose their jobs, more will follow as the ESB gets out of fossil fuels at Moneypoint. Major re-skilling is needed, backed by substantial funding.

It calls for planning restrictions for rooftop solar panels on homes, farms and small businesses to be lifted, and a rollout of microgeneration opportunities for communities, where they are paid for supplying electricity to the grid. With large-scale projects, developers should be required to provide “community benefits and investment opportunities”.

Key issues: There are major obstacles to wind, solar and community energy, requiring legislative and regulatory changes. Adopting the Marine Area Foreshore Amendment Bill would rapidly unlock offshore development. The move to increase biomass usage will need to be sustainable if the sector is to develop.

The report outlines the need to “deep retrofit” of more than 1.5 million private houses, converting at least 45,000 homes a year over the next 15 years.

The establishment of a one-stop shop in each county to support citizen and community participation in the transition is recommended, backed by low-interest, long-term loans to incentivise conversions.

Key issues: Major questions remain over the skills and personnel to implement this measure and putting in place sufficient funding to complete it – it costs up to €50,000 to retrofit a home.

The report highlights a deficit in “climate literacy” and calls for climate to be embedded into the educational curriculum. The public interest can be served by imposing formal quotas of climate-related content on licensed broadcasters, it says.

Key issue: There is widespread acceptance that climate change is real and represents a threat to the planet. Translating that into action, whereby every business, community, household and individual accepts a need to reduce their carbon footprint by changing polluting behaviour has yet to be realised.