The rapid decline of the restless, chirruping house sparrow

Another Life: The disappearance of this bird from cities has prompted much research 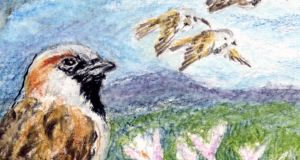 House sparrows: their modern decline in most cities of western Europe, in places to virtual extinction, has prompted much research. Illustration: Michael Viney

Our dozen house sparrows were, for the moment, stationary and parallel, each on a hawthorn twig and pointing its beak at the sun. I shared this arresting moment with the garden’s most restless birds.

I say “our” sparrows: if I could ring them, I’d know. We’ve greeted them each spring for many years, back from wherever it is they wander to in winter. The males’ gonads, I read, swell “from pinheads to baked beans” in preparation for mating.

I say a dozen, which is as many as I get to before they’ve whirled away down the hedge. What’s certain is how few this is compared with the hundreds that nested in the thatch of the cabins that crowded this hillside before the Famine.

Until motor traffic arrived, thousands hopped around the pavements of Dublin to peck at grain spilled from horse nosebags or undigested in their droppings. Chicks twittered from every crevice of O’Connell Street’s facades, including (as an early birder recorded) the hollow eyes of the bulls’ heads on the Rotunda.

In the planet’s 20 kinds of seed-eating sparrow, 14 species nest freely in holes in buildings. But the house sparrow, Passer domesticus, excelled as an early “sedentary human commensal”, settling down amicably with people. Latching on to the takeaway grain around the first Neolithic farmers of the Middle East, it spread inseparably with farming people to achieve a virtually worldwide distribution.

Once common across the island, a BirdWatch Ireland survey finds them breeding in less than half the squares under census. The end of the west’s small oatfields; of farmyard hens and ducks and their dishes of mashed potato and scatterings of grain; the mowing of grass for silage before it seeds; the ploughing-in of autumn grain stubbles, the use of herbicides to rid field margins of seeding weeds – all changes to starve the sparrow into decline.

Free peanuts are what bring them to us in the breeding season, crowding the feeders mob-handed to the exclusion of other garden birds. Only the goldfinches can be quite such bullies. And I can think of them unkindly in winter, when their nests in the house gutters have me dodging spouts of rain.

Globally, house sparrow populations give conservationists “least concern”, yet their modern decline in most cities of western Europe, in places to virtual extinction, has prompted much research. In London, especially, where sparrows had been such a cultural icon, it was a popular concern about their loss that first drew the attention of ornithology.

In India’s cities, too, the disappearance of house sparrows from dusty streets has aroused dismay – enough for Delhi to declare it the state bird and mascot in 2012. The Bihar cabinet followed suit and March 20th was declared World Sparrow Day. Thousands of nest-boxes have been put up in Hindu temples and households, and “Spare a thought for sparrows” became a popular newspaper headline.

In Dublin, the decline was personally noted by Dr Denis Summers-Smith, now nearing his 100th birthday safely, I hope, cocooned in rural Yorkshire. After a lifetime devoted to studying the sparrows of the world, he concluded: “The urban decline appears to be proceeding at an increasing rate and is showing no signs of stabilising.”

Among many speculations on the reasons, the latest is infection of sparrows by a parasite that gives them malaria. A study led by Dr Andrew Cunningham of the British Trust for Ornithology (BTO), was published online last year by The Royal Society (at doi: 10.1098/rsos.182197).

The sparrows of suburban London had declined by 71 per cent since 1995 and the research team found their infection by the parasite Plasmodium relictum averaged 74 per cent, higher than previously recorded in any wild bird population in northern Europe.

Sparrowhawks and garden cats, lack of insect food for chicks, diesel fumes and phone-mast radiation have all been blamed for the sparrow’s urban declines.

The lack of insect food seemed a likely contender, until a large-scale experiment in London, feeding mealworms to nestlings, produced greater fledgling success but did nothing to improve juvenile survival through the winter. “Parasitism,” offers the BTO study cautiously, “is generally understudied as a potential cause of avian population declines.”

Meanwhile, the rude health of our own little colony bursts out in the loud and sibilant chirruping that greets my morning stroll along the boundary hedge. It drowns the welcome wheeze of the greenfinch, the great tit’s pumping of a bicycle tyre and the chaffinch’s closing exclamation.

This is the unexpectedly deafening “social singing” defined by Summers-Smith. It includes, perhaps, the “ecstatic calling”, a chorus of virile baked-bean boasts.