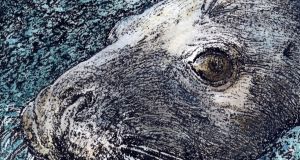 Ireland can boast one of the least toxic terrains on the planet, at least for people. With the exception of a few deadly mushrooms, which are avoidable, the most poisonous wildlife drifts in from outside – notably a few stinging jellyfish.

Few if any of our fellow mammals in Ireland have needed to evolve ways of eating other, venomous, creatures. In the rest of the world at least 3O mammals are known to have developed biochemical defences that negate a poison or numb response to pain.

That could be said, I suppose, about Ireland’s badgers and pine martens, attacking bees’ and wasps’ nests for grubs. But our hedgehogs, unlike some of those in continental Europe, do not include scorpions or vipers in their prey.

All this makes it more intriguing that some Irish grey seals may specialise in eating the venomous weever fish, Echiichthys vipera, whose piercing of any human foot can prove extremely painful.

Wintering at the moment in near-hibernation in deeper, warmer water at perhaps 150 metres, the hand-size lesser weever returns to the shallows in early summer, burrowing into the sand and resting there with just its eyes and the tip of its black dorsal fin exposed. Its ambition is the ambush of little fish such as blennies and gobies with a dart of its upward-pointing mouth.

It is also equipped to punish anything that tries to eat it, or otherwise presses on its venomous dorsal spines. It can stay buried as the tide recedes and wait in the sand until the water comes back.

Fear of the weever would occasionally haunt my own childhood paddling on the intertidal sands of Sussex. The memory was revived a year or two ago when Mayo surfers at nearby Carrowniskey began writing agitated blogs about the apparent concentration of weevers on that strand.

“On the rare occasions when it is plentiful,” one expert wrote, “rows of erect black triangles decorate the sand floor of the seabed.”

Something like that may have supplied the remarkable appetite of some seals for weevers reported in Biology and Environment, the journal of the Royal Irish Academy. The discovery is a spin-off from a study by four researchers at UCC, led by Dr Martha Gosch, examining the diet of grey seals for potential impact on commercial fisheries.

This entailed gathering some 150 seal scat (droppings, faeces) from sand banks at Raven Point in Wexford Harbour used as a haul-out by up to 300 animals. Collected between cleansing tides and across two years, the scats were unlikely to repeat offerings from the same individuals.

Weever remains, including the bony otoliths of the inner ear (a standard identification of fish), were found in 4 per cent of the droppings, including one scat with remains of 76 of them, plus one sign of flatfish. The relatively high abundance of weever in a limited number of scats, the study concluded, was “some evidence for specialisation”.

It also suggested that the seals had developed a way of eating the fish without suffering from the venom. The skin inside a seal’s mouth and oesophagus is not especially thick compared with that of the leatherback turtle, which regularly eats jellyfish with toxic stings. Grey seals tend to eat fish whole, suggesting that they may have learned to gulp weevers head first, helping to push the poison spine flat.

Seals themselves figure among specialised choices of prey. Wildlife films have shown spectacular and chilling sequences of killer whales (orcas) killing seals, surging onto beaches to drag them into the sea on the southern coast of Argentina or ganging up to make waves that wash Arctic seals off ice floes.

Given the abundance of seals off Ireland and Scotland, this has me wondering why the orcas – two separate groups with seven or eight in each – have seemed to leave them alone.

Some genetic research on orcas, including those of the north Atlantic, suggests that their small social groups have created “cultures” of hunting that are genetically inherited. Some, more nomadic, groups are seal eaters while others hunt fish and seabirds off particular coasts. The orcas that commute between west Scotland and Ireland are well-known as fish eaters, though others have been filmed eating harbour porpoises off Scotland.

At Shetland last September, orcas were videoed flipping a harbour seal pup into the air, like the playful assassins of Argentina. And new research from the University of Aberdeen potentially links the orcas to a dramatic decline in numbers of Scotland’s harbour seals, with numbers in Orkney and Shetland dropping by 40 per cent in five years.

Unlike the grey seals, which pup in late autumn, the smaller harbour seals pup in June and July, the months when most orca sightings are reported to the Irish Whale and Dolphin Group. The last harbour seal surveys, almost two decades ago, found more than 4,000 of them around Ireland’coasts. It may soon seem appropriate to count them again.