The big bird census: It’s that time of year to keep an eye on the garden 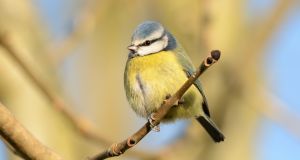 Are you looking for a way to connect with nature without having to venture outdoors on these chilly days? Well, look no further than Birdwatch Ireland’s Irish Garden Bird Survey, the annual counting of birds in gardens across Ireland from early December to the end of February.

To partake, all you have to do is record the highest number of each bird species that you spot at the same time in your garden each week. “You count any bird in your garden, or yard, on a feeder or on a window sill but you don’t count a flock of whooper swans flying over your garden or birds in neighbouring fields. We only want you to record one figure [the highest number you spotted] each week in the survey,” explains Brian Burke, co-ordinator of the Irish Garden Bird Survey at Birdwatch Ireland.

In the winter of 2018-2019, more than 1,600 households took part in the survey, the highest number of participants in the survey’s 30-year history. Birdwatch Ireland is hoping for even more participants this winter in what is the longest-running and biggest citizen-science survey in Ireland.

“For some people it’s a firm winter tradition, but for others last year was their first year to take part. The main response from new participants was “Why didn’t I do this before? It’s a great way to learn about less common birds”, says Brian Burke. Participants are requested to complete the survey for at least 10 of the 13 weeks, which officially starts on December 2nd.

Interacting with wildlife is a key motivation for many participants, as is the personal bond many people develop with the birds in their gardens. Feeling they have a role in wildlife conservation efforts is another reason many participate.

The winter months – particularly if they are very cold – are the most difficult time for garden birds. And urban, suburban and rural gardens can provide food, water and shelter for all wildlife and particularly birds.

Burke says that people should pay careful attention to the type of food left out for garden birds. Sunflower seeds and peanuts are popular choices, but Burke points out that most birds can’t eat cooked porridge and that mouldy peanuts can make them ill. Cheap bags of mixed seeds can result in debris in your garden that will attract rats. Salted nuts or any salted foods are also unsuitable for garden birds.

“The lower-quality mixed seeds will result in a lot of spillage, as birds find millet and corn hard to digest. Never leave out food in netting, as birds can get caught in it. Sunflower seeds, chopped fresh or dried fruit, uncooked porridge oats, cooked rice or mild grated cheese will attract a diversity of birds. The more diverse the food, the more diverse the birds,” says Burke.

Leaving out trays of water – when temperatures go below freezing point – also provides birds with an alternative water source when puddles are frozen over. And it’s good to remember to spread feeders around the garden, as some birds will prefer to feed in sheltered spots rather than on bird tables in open areas. Bird tables with roofs will also provide birds with protection from marauding cats.

“It’s a good idea to create corridors for birds to move through,” says Burke, who also recommends people clean and disinfect their bird feeders and water trays every two weeks or so to prevent spread of disease, as different species come together to feed.

Robins, blackbirds, bluetits, chaffinches and magpies are the most common garden birds throughout the country. Great tits, house sparrows, goldfinches, coal tits, starlings and wrens are also commonly spotted. Birds such as sparrowhawks, mistle thrushes, goldcrests and pheasants have also been seen in 25-30 per cent of gardens.

Apart from the obvious enjoyment of watching garden birds – and taking a few minutes’ break from busy routines – these long-term surveys allow Birdwatch Ireland to monitor bird populations in the winter months and spot trends.

“It tells us how different species are faring over the years and the increases or decreases in response to the weather or food availability,” says Burke.

For example, in winter 2017-2018, which was punctuated by the Beast from the East extreme weather event, more birds sought out food and shelter in Irish gardens. During the mild winter of 2018-2019 (the warmest winter on record in many parts of the country), they had plenty of other sources of food.

Burke explains how the survey results show that three different thrush species were present in many more gardens than normal in 2017-2018. “Song thrushes, redwing and fieldfare were driven into gardens for food and shelter, as the rest of the countryside was covered in snow. While last year, their numbers returned to normal – or actually a bit below normal because it was so mild they had plenty of areas to forage in the wider countryside,” he explains.

Similarly, species like woodcock, snipe, skylark and a few of the gull species are not birds we associate with gardens but showed up a lot during the Beast from the East and returned to much lower levels last year,” explains Burke.

This year, for the first time, Birdwatch Ireland is asking participants to note if they see a sick bird in their garden. The organisation is particularly keen to monitor finch species suffering from trichomoniasis, a fatal parasitic disease that has resulted in a huge decline in the number of greenfinches in Ireland in the past 10 years or so.

Affected birds will appear slow and lethargic and have difficulty swallowing.

To find out more about participating in the Irish Garden Bird Survey 2019-2020, go to https://birdwatchireland.ie/our-work/surveys-research/research-surveys/irish-garden-bird-survey/. For symptoms of sick birds, see bit.ly/sickbirds99