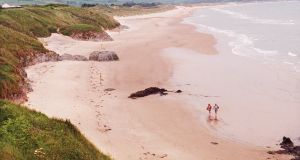 If you happen to be out walking on Brittas Bay beach in Co Wicklow today, you might be surprised to see a group of people walking through the sand dunes with notebooks and maps.

These volunteers, led by ecologist Alan Lauder, are mapping out the areas of sea buckthorn, an invasive species that has taken over sections of the sand dunes, not allowing native flowers and grasses to grow.

This citizen science task is one of the first actions to manage the rich sand dune system that runs along the coastline as part of Wicklow County Council’s new conservation management plan for the section of Brittas Bay it is responsible for.

For many people Brittas Bay is a long, sandy beach south of Wicklow town where people go for holidays and day trips in summer.

What most people don’t realise is that Brittas Bay is part of a Special Area of Conservation with a particularly striking and vulnerable bank of sand dunes.

“These are one of the biggest dune systems on the east coast of Ireland. About 100,000 people come to the beach here every year, and we want them to look after the dunes,” says Lauder, who wrote the conservation management report of Brittas Bay, published by Wicklow County Council in November 2018.

During the summer months, children slide down the front section of the dunes. This can seem like harmless fun, but too many paths up through the dunes, and too much walking across large hollow areas, have created craters in the dunes. This makes it difficult for marram grass to take hold to keep the frontal dunes strong so that they can protect the area from storm surges.

“Most of the dunes are eroding either due to storms or disturbance from people walking through them. We can’t control the storms eating into the dunes but we can encourage people to recognise how valuable the dunes are and look after them,” says Lauder.

“We want to raise community awareness about the dunes by both promoting their biodiversity value and their preciousness in terms of conservation,” adds Deirdre Burns, the heritage officer with Wicklow County Council.

Initial efforts to conserve the dunes include mowing a section where bracken has completely taken over. This section will then be monitored over the next couple of years to see whether the sand dune grasses can take hold again.

Similarly, it is hoped that natural dune grasses will grow again once the sea buckthorn is removed from areas in the Brittas sand dunes in spring 2020.

On a walk through the dunes with Lauder in October, I saw how the dunes varied from high sandy mounds to large grass areas covered in bracken to sections where sea buckthorn dominates. Within the back area known as a dune heath, there are also small areas of lichen and mosses where rare orchids grow in the late spring/early summer.

“A lot of people from Dublin have childhood memories of coming to Brittas Bay. But, in the summer, the dunes are covered in litter, broken glass and cans. If it was a nature reserve, we could celebrate the site and bring people on guided nature walks along [designated] paths through the dunes,” says Lauder.

Lauder says signage also needs to improve. At the moment there are several signs in both the north and south car parks, none of which point to the importance of looking after the sand dunes. “Signs are like an invasive species here. There are too many saying different things. Some are vandalised and some are out of date. There is a job to be done about signage too,” says Lauder.

At a recent community information meeting on Wicklow County Council’s conservation plans for Brittas Bay, participants discussed whether the general public would pay more attention to conservation issues on Brittas Bay if it was called a nature reserve.

Burns says that citizen science events, such as the mapping of invasive species and other recording the plants and birds in the dunes on Brittas Bay, will lead to better understanding and appreciation of the importance of conservation.

“It’s about changing attitudes. For people to see Brittas Bay as a nature reserve rather than just a beach to go to on holidays will be a subtle change over 20-30 years,” she says.

HOW SHOULD BRITTAS BAY BEST BE PROTECTED?

Deirdre Burns
Heritage Officer, Wicklow County Council (WCC)
“We want to raise community awareness about the dunes by both promoting their biodiversity value and their preciousness in terms of conservation.”

Sinéad Keane
Brittas Bay Beach Care Group
“Most people who visit Brittas Bay aren’t aware it’s a Special Area of Conservation (SAC). So we need a seismic shift of consciousness among the public about how we treat it. There needed to be a strategic management plan put in place to protect the SAC and its future. It’s great to see this happening now. We’d love Brittas Bay to eventually become a plastic-free community: if people can’t bring single-use plastics on to the beach in the first place, then we don’t have to worry about the aftermath.

Richard Nairn
Wicklow-based ecologist and author of Ireland’s Coastline
“Brittas Bay is important because it is one of a few sizeable areas of dunes that don’t have a golf course or other land uses that has made major changes to the dune system. The seaward line of dunes are intact. Brittas Bay is what’s called a closed coastal cell, in which the sand lost from the dunes stays within the area. Big problems arise when efforts to stabilise dynamic dune systems (for example, with rock armour), break the connection between the sand dunes and the beach, and this hasn’t happened at Brittas Bay.”

Jason Monaghan
National Parks and Wildlife Service conservation ranger for east Wicklow
“The NPWS owns and manages part of the Brittas Bay dunes at Buckroney Nature Reserve. We are currently replacing old fencing there. Then we will have horses grazing in the dunes to deal with overgrown areas of bracken and bramble so that protected plants on the site (wild asparagus and meadow saxifrage) can survive. I think the WCC practical conservation management with community involvement should be applauded. There is much we can learn from it.”