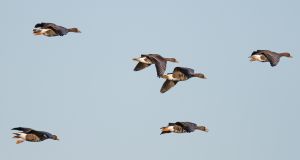 “There’s not much natural here,” says Dominic Berridge with mild irony, as he walks me through the sophisticated hydro-engineering works that converted Wexford Harbour’s North Slob from hundreds of acres of wild salt marsh (or “slob”) to highly managed pasture and tillage in the late 1840s.

This might seem an odd introduction to one of our most successful and oldest bird sanctuaries, the Wexford Wildfowl Reserve. But it reveals a paradoxical truth.

On a planet where we humans have changed so many landscapes so radically, and caused such drastic reductions in the populations of other animals, artificial areas – “socio-ecosystems” – now sometimes provide the best refuges for particular endangered species.

The original salt marshes must have been home to many kinds of birds, in numbers we can scarcely imagine today. But this habitat would not have been favourable to the Greenland white-fronted goose. Yet this is the bird with which the North Slob has been most closely associated for many decades, and which offers us one of the most spectacular wildlife spectacles easily accessible to the public in this country.

Anyone who has visited the North Slob between October and April is likely to remember the unusually musical and haunting calls of thousands of “white-fronts” (named for the conspicuous white band around the bird’s bill). And if you are there at dusk or dawn, you are likely to be astounded by the sight of huge flocks of geese shifting, in vast patterns alive with kinetic energy, to and from the sandbanks in the harbour where they roost at night.

These geese are the main reason that the reserve, which celebrated its 50th birthday last month, was created. And they are the chief focus of the environmental management of the reserve, a joint project of the National Parks and Wildlife Service (NPWS) and BirdWatch Ireland, with the active co-operation of a dozen farmers on the private lands within its limits.

Berridge, an NPWS conservation ranger, acts as warden on the reserve, and is steeped in its natural and cultural history. He is as likely to comment in detail on the remarkable lives of the entrepreneurs who converted the slob as he is to point out subtle differences between the resident mute swans and the whoopers that are just beginning to arrive here from Iceland in early October.

The conversion of the land was the brainchild of, among others, Limerick’s William Dargan, the brilliant engineer who established the Irish rail network (and helped set up the National Gallery). The major local figure was John Edmond Redmond, great uncle of the Nationalist Party leader.

They created a polder, a landscape feature familiar in the Netherlands, but very rare here. This involved building a sea wall between the slob and the harbour area and a roughly semi-circular canal behind it, enclosing 2,400 acres.

This canal intercepts flows of fresh water from the higher land surrounding the former marsh. The most challenging engineering feat was the construction of a pumping system to expel this water into the sea when canal levels rose.

The slob is still drained on this basis today, and the resulting landscape has proved productive for grazing and cereals. From an aesthetic point of view, however, absent the winter birds, it is a pretty dull prospect.

Monocultural rye grass alternates with monocultural barley stubble. Like most of our farmland it is no paradise for wildflowers. Hedgerows are sparse, where they exist at all.

But all that suits the reserve management plan for the geese, which has not altered much in half a century, just fine.

“We are not looking for semi-natural habitats here,” says Berridge. He points out that the reserve is not working under the auspices of the EU Habitats Directive, which protects the biodiversity of an entire ecosystem, but under the Birds Directive. The conservation of the Greenland white-front, Europe’s rarest goose, is paramount on the North Slob.

The geese love the rye grass, they love the shoots from spilt barley, and they are also partial to fodder beet. The latter is planted by the NPWS, and mechanically “lifted” when mature, but left in place. So you could see these fields as gigantic bird feeders. The geese also like very open spaces, so that they can see danger at a distance, and would not prosper in smaller fields enclosed by hedgerows.

All these factors, plus the vital nearby access to sandbars for safe night roosts, have made the North Slob a “honeypot” for this species, says Berridge. Yet they are relatively new to the area. They were first noticed in the 1910s, though other geese, especially the greylag, had long been thriving on the new fields, as had smaller wildfowl. This made the slob very popular with hunters.

In contrast, the white-fronts had long been colloquially known in Ireland as the “bog goose”, wintering on open peatlands with little human presence. But during the last century this habitat was extensively drained and cut for turf, or converted to forestry.

By the 1930s, the white-fronts were beginning to leave midland and western bogs and had virtually replaced the greylags on the North Slob by the 1950s.

During this period, the great wildfowl conservationist Peter Scott had made a major discovery. His hunting partner shot, quite legally at the time, several white-fronts on the slob. On close examination these birds turned out not to be the sub-species breeding in Russia, as had always been thought, but a different sub-species breeding in Greenland, whose only other wintering ground is in Scotland.

Subsequent ringing and radio-tagging research has shown that the vast majority of Ireland’s wintering white-fronts breed in Greenland, stopping off in Iceland. Hunting bans here, and ultimately in Iceland, boosted populations up to the turn of the last century. A severe decline since then is blamed partly on climate change impacts on the breeding grounds.

Today, Wexford Wildfowl Reserve hosts about two-thirds of Ireland’s approximately 12,000 white-fronts, which make up half the world population.

It’s a big responsibility and Berridge lists several threats facing the future, among them the danger of disease with such a high concentration of birds and the risk posed by rising sea levels to the polder itself.

Nevertheless, the reserve has a lot to celebrate on its half centenary, not least an enviable level of co-operation with those who farm within its boundaries.

How to get there

Wexford Wildfowl Reserve lies within 10 minutes of Wexford town. It can be visited daily from 9am to 5pm and offers three sheltered viewing points, one a tower, from which geese, swans, ducks and wading birds can easily be viewed.

There is no public access on to the reserve itself, as the white-fronts are very easily disturbed. But you can get excellent sightings with binoculars and especially with a telescope.

There is a visitors’ centre with an excellent introductory short film and some information displays. These are often charming but now rather show their age. Perhaps some enterprising sponsor might consider a revamp as a 50th birthday present.

A guide is usually available to offer further information and the reserve has very active and well-supported schools education and transition year programme.