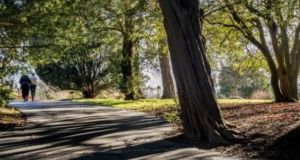 Temperatures are forecast to reach 20 degrees in parts on Saturday. File photograph: The Irish Times

The weather is to be mostly dry with some light showers over the weekend, with temperatures hitting 20 degrees in parts on Saturday, Met Éireann has said.

Rain is due over the northern half of the country on Friday and will be heaviest in Ulster, the national forecaster has said.

The south of the country will be dry and sunny in the evening. Temperatures are below average for this time of year, with highs of between 14 and 17 degrees and moderate breezes.

Friday evening is set to see long dry spells, with scattered showers remaining in the northwest. The forecaster said it will be “chilly for early July” with temperatures hitting lows of five degrees.

There will be some mist and fog in the southern half of the country where temperatures are due to drop the lowest.

Saturday will be mainly dry and milder than the rest of the week, with temperatures hitting highs of 20 degrees. There will be some short rain showers in parts of the north and west of the country.

The weather will be warmest in Leinster and Munster, with light winds.

Saturday night will remain dry with lowest temperatures between seven and nine degrees.

The dry weather will continue into Sunday morning, with some sunny spells forecast. Light rain and clouds from the Atlantic coast will move in over the afternoon, but the southeast is expected to remain dry.

Temperatures may hit 21 degrees in sunny spots, and 16 to 19 degrees elsewhere. The rain is forecast to get heavier and cover most of the country by Sunday night, with Monday morning to be a cloudy, wet start to next week.