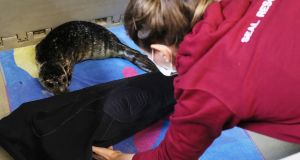 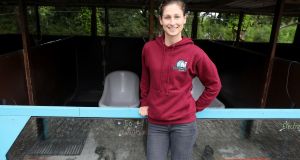 Dozens of orphaned seal pups who were swept away from their mothers during storms are being saved by “wetsuit mums”.

Seal Rescue Ireland in Co Wexford has seen a recent surge in orphaned seals, with many just days and weeks old.

The injured or orphaned pups are comforted by the “fake mums” which are made from old wetsuits.

The charity organisation which rescues, rehabilitates and releases native seals from across the coast, said it used wetsuits that would have ended up in landfill.

Each of the pups needs months of care after being separated from their mothers and would not survive if left alone in the wild.

The “wetsuit mums” are made to look and feel like an adult seal and are placed beside the pups in the centre’s intensive care unit.

“When they become separate from their mother very young, they have virtually no chance of survival and that’s when we have to step in, help them and bring them back to a healthy weight, and get them big and strong enough to be released into the wild,” she said.

“They can be very stressed and we look for ways to keep them calm.

“The idea kind of evolved and we tried it out and it was a hit. It’s a practical way to help them along. It’s very heart-warming and this is the closest thing they will have to a mother.

“We have 17 pups and they all get a fake mum with them. We put them into an ICU container with a heat lamp; it’s a quiet place for them to rest.

“After storms we always get a huge amount of calls about abandoned pups so this is how climate change is impacting,” said Ms Croce.

“They also become orphaned through human disturbance. People don’t realise that seals need to rest and they raise their young on the beach and if you approach a seal, the mother might leave and not come back for their young.”

The designer behind the “wetsuit mum”, Lynn Haughton, said she wanted it to resemble an adult seal.

Ms Haughton, who is founder and designer of the Upcycle Movement, had been volunteering at the centre when she was asked to make the wetsuits.

“I repurpose recyclable textiles and I have my own design collection focusing on wetsuits so we tried out this new creation and it worked,” she said.

“It has a recycled waterproof lining filled with off-cuts from old wetsuits so it’s great to get those used too.

“The seals responded really well – most have gone straight to it but some aren’t bothered.

“It’s definitely effective. They are really happy with it and other rescue centres in the UK have contacted me about how they can do it.” – PA

Support package for publicans needed by end of month, say represenative groups 13:57
Aaron Brady found guilty of capital murder of Det Garda Adrian Donohoe 13:08
Garda Adrian Donohoe profile: ‘Big in heart with so much to live for’ 12:56
Covid-19: Restrictions an attempt to prevent State going back to ‘beginning’ 10:37
Sunny spells forecast with high temperatures of 26 degrees 09:02